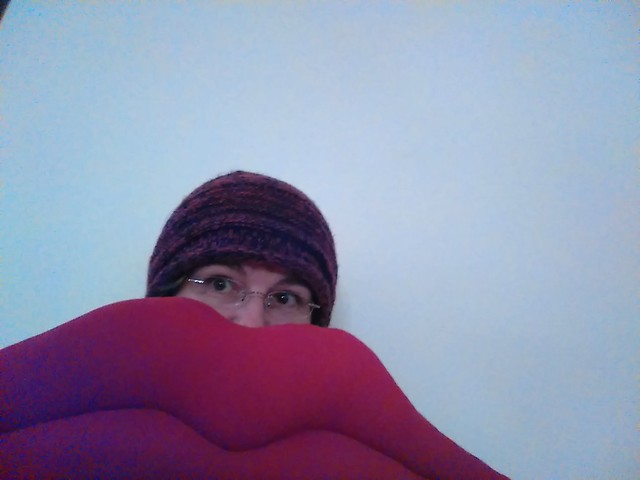 The Womens March on New Jersey 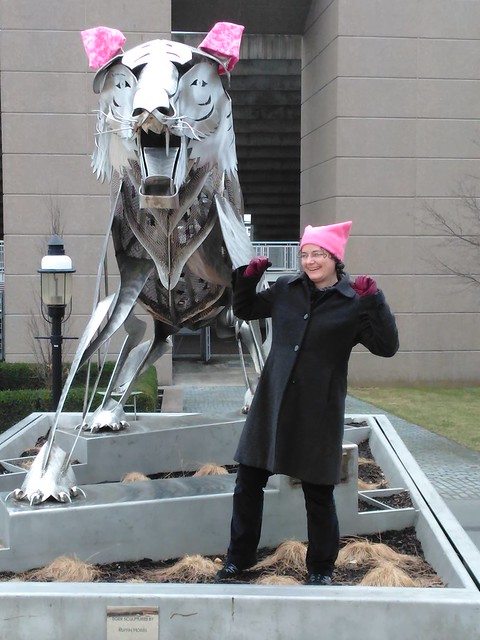 Outside Princeton U stadium the day before the march, distributing the last of the 64 hats I sewed.  (I gave them to people;  I didn't leave them there).

It's about time that I write about the Womens March, which took place on January 21, but feels like it was so long ago.  I marched in Trenton, NJ, the capital of my home state, with Francesca, my 81 year old friend from my meditation group, and her husband George. 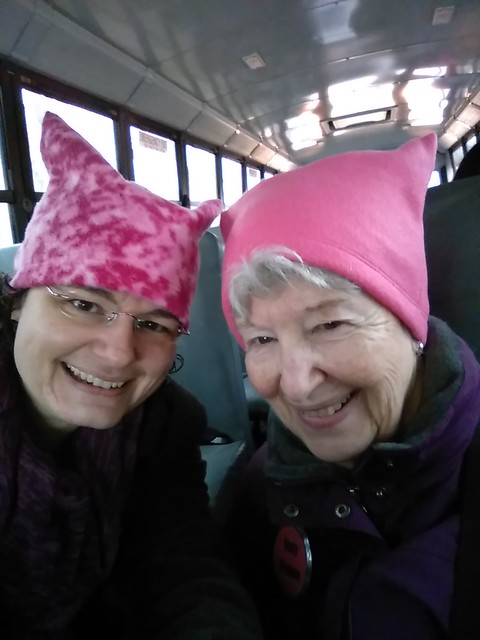 We had tickets to take a school bus from Princeton (right around the corner from my office) to Trenton. 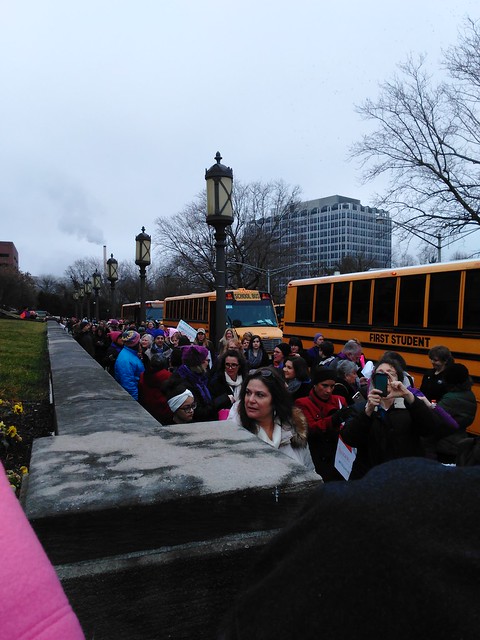 The crowd filing in 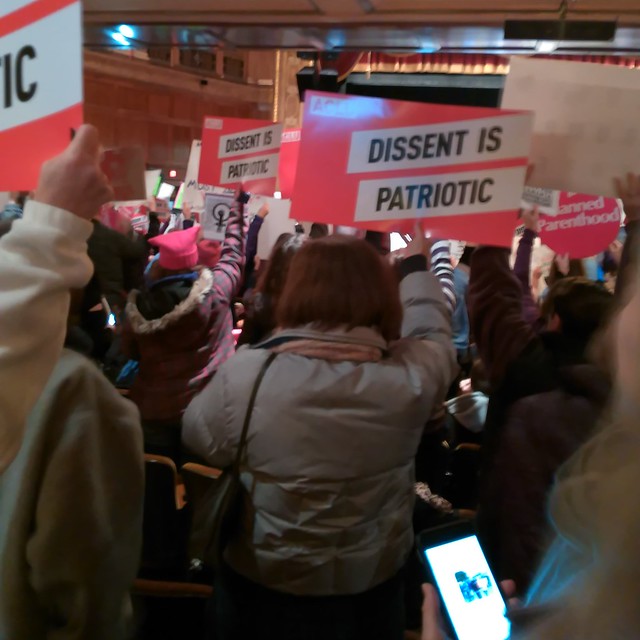 Everyone hold up your signs 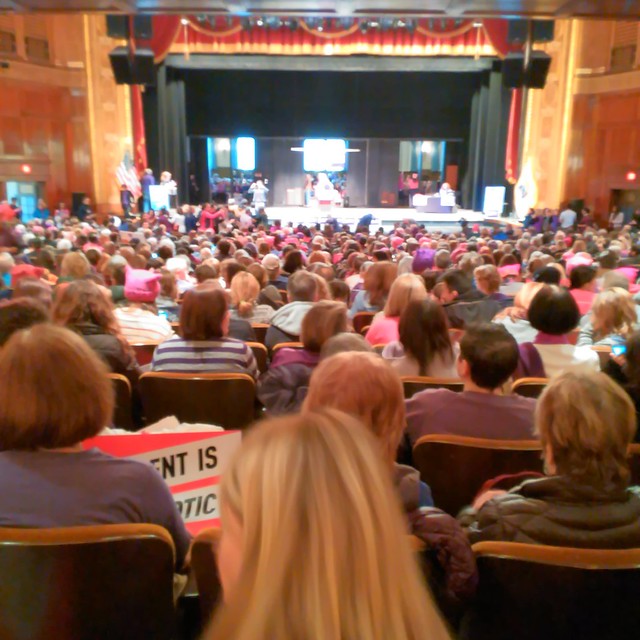 The first part of the event was held at the War Memorial Theater.  We arrived around 9:10 or 9:15am or so for the 10am start, and we got seats third row from the back of the theater.  The theater filled up as well as the overflow of 1,000 seats  behind the stage.  Everyone else had to listen over the loudspeakers outside.  Estimates are all over the place, anywhere between 4k and 6k people at this march. 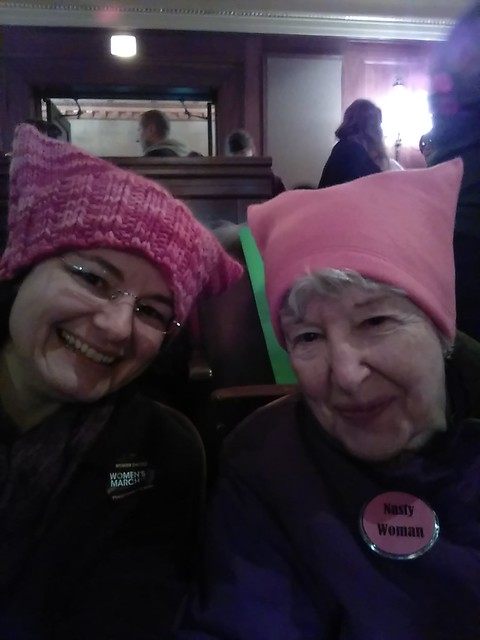 James from craftspacecontinuum had knit a hat for me.  I am allergic to wool so I can't wear it for long, but there was no way I was giving his hat away!!! 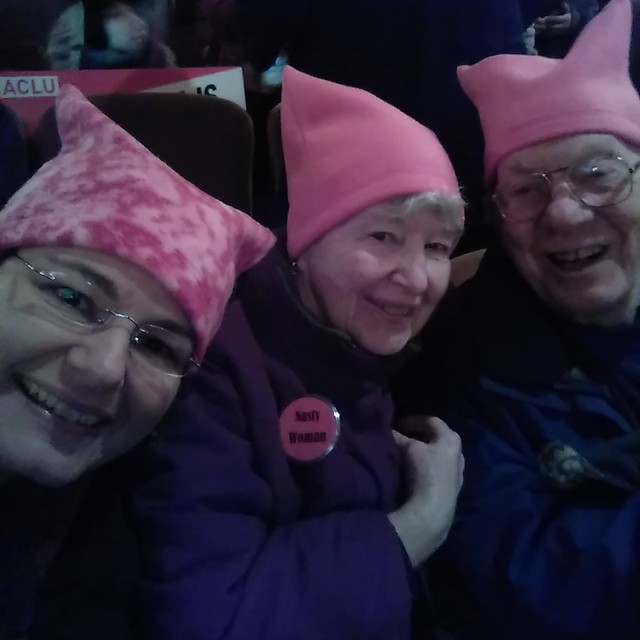 George put on his pussyhat!

There were almost 2 hours of speeches by a diverse and inclusive group of speakers:  Different ages, races, genders, sexual identities, religious backgrounds, and activist groups were represented.  This was my first time hearing my congresswoman, Bonnie Watson Coleman, speak.  She is the first African American woman to represent NJ in the House, and she is awesome!  "We will not be shut down.  We will not be silenced.  We will NOT be silenced!" 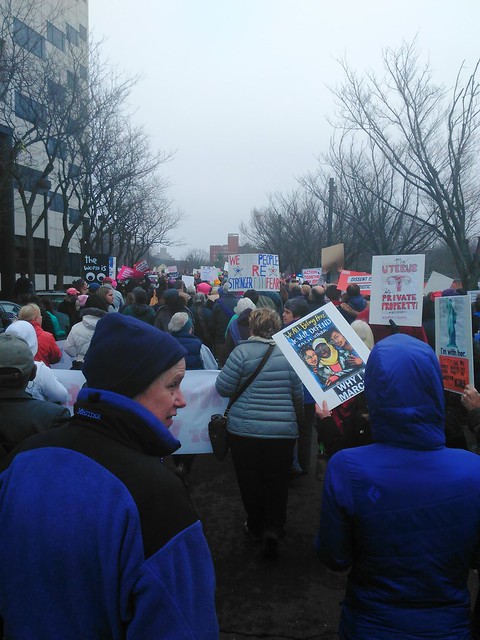 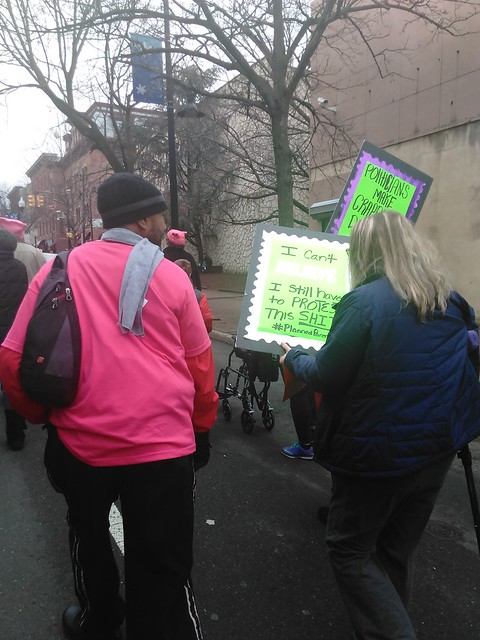 "I can't believe I still have to protest this sh*t" 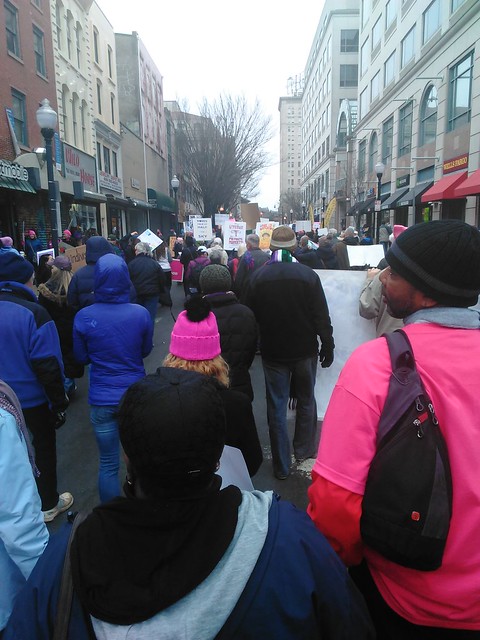 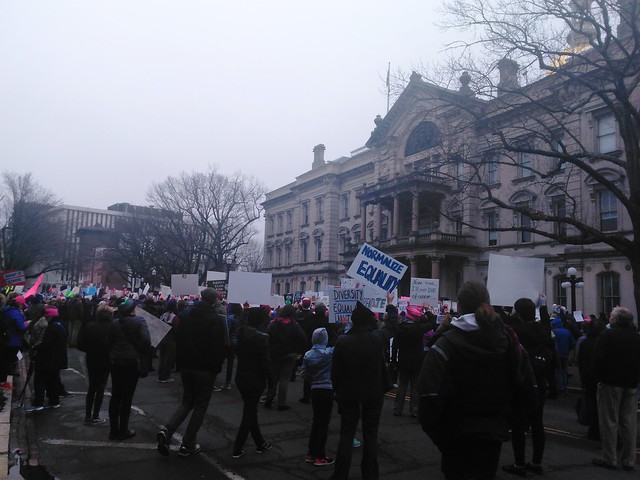 The march ended at the State House.  My mother worked here during the 60's in a job she *loved*, and it was fun to imagine her walking up the stairs and into the building.  There were more speeches, then it wrapped up at 1pm.  Francesca then danced to Aretha Franklin on the sidewalk as we waited for the bus to take us back to Princeton. 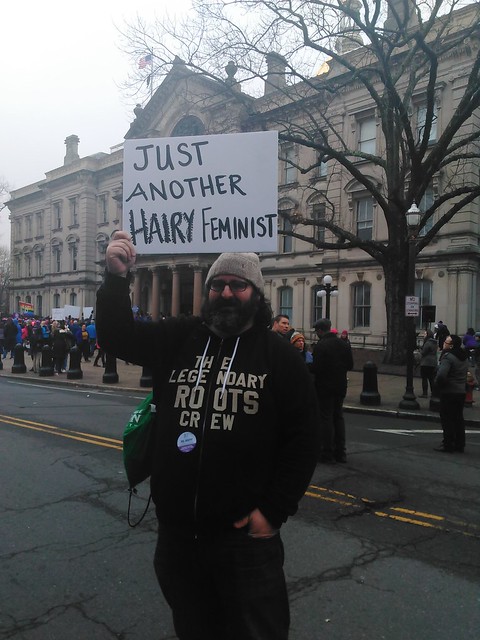 While waiting for the bus, I asked this guy if I could take a picture.

The overall vibe was positive, and I never felt in any danger.  One of my friends had told me I should write the name and number of a lawyer in sharpie marker on my skin, carry pepper spray and have someone to check in with later that afternoon.  I didn't do any of those things, and it wasn't necessary.

I was instagramming throughout the day as I could with pix and video (my phone and/or the network wasn't working for part of the march) and I really appreciated the overall good comments I received.

It was amazing to see that there were marches not just in the US but all over the world, including Antarctica. I knew from IG that there was going to be a march in London, but WOW the marches were all over and non-violent.

The overarching theme was "this march is not the end, it is the beginning."  As we have seen over the last 18 days, there is plenty of work to be done.  I'm still working out a path forward, but on Valentine's Day I will show you my next bit of craftivism (which I already showed on IG, but not here).

I made and distributed 64 hats at my Pussyhat Factory (I removed the throat plate on my sewing machine and vacuumed it, and vacuumed my serger, and vacuumed my cutting mat--so much pink fleece lint everywhere after sewing up 8 yards of fleece).

I know of at least 3 people who made hats because I had been instagramming them in the weeks leading up to the march, which was awesome!  And the Pussyhat Project received some donations because of hats I made for others, yay!

Don't doubt the power and influence you have and the inspiration that you are--these little ripples can add up, even for an introverted hermit like myself. 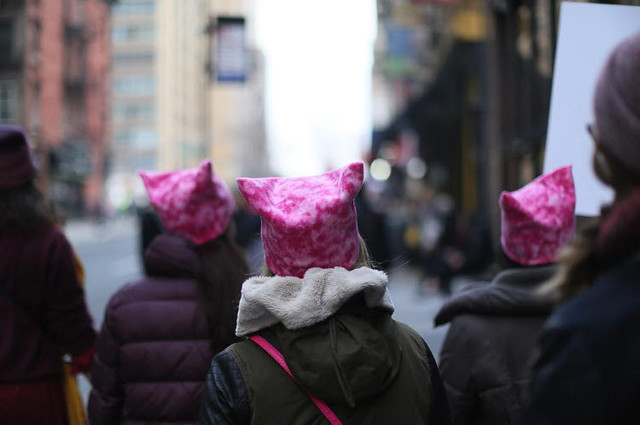 I have received many pictures of people wearing my hats in Atlanta, NYC, DC and of course Trenton, but I am too overwhelmed to get them into a collage here.   Above is one of my favorites, by Anna Christina's daughter (kayeightysews on IG), during the NYC march.