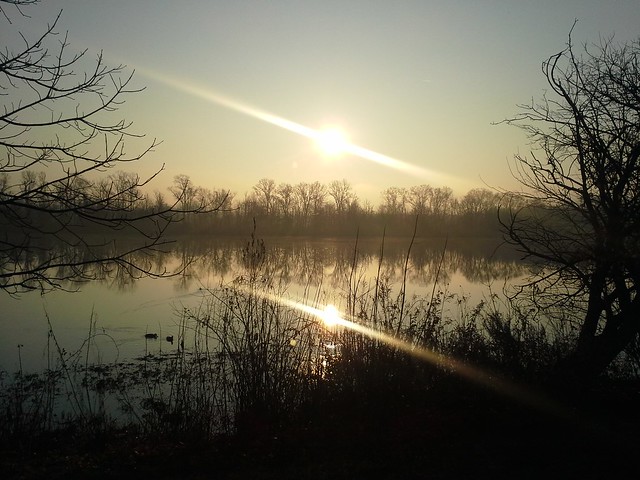 The sun rising over Lake Carnegie in Princeton, NJ on Friday morning, December 11, 2015

Where did my blog name come from?

Sometimes I transpose words in my head.  For example, I would see someone mowing the lawn, and I would think they were vacuuming the lawn.

I thought that would be a great name for a novel, if I ever wrote a novel.

In 2006, I stumbled across a Project Runway marathon on Bravo.  It happened to be judging time, and Michael Kors was talking and I was like, What.Is.This.Show????  Since it was a marathon, I kept watching and was hooked. I had been sewing off and on since I was 12, but wasn't actively sewing in 2006.   That weekend, after watching PR, I sewed a tank top from stash fabric (that's back when my fabric stash fit in a laundry basket).  I kept on sewing after that and haven't really stopped since.

What to name it?

As it turns out, doing without bottled water was not a dramatic experience and not all that blog worthy.  I think I wound up drinking less than 30 bottles of water that year (mainly while traveling) when I was drinking more than that a week previously. It was really not a big deal.

In March of 2008, I joined Pattern Review because I was desperate to read a review that was more than 6 months old, and you had to have a PR account to read reviews older than 6 months.   I started reading lots of reviews.  It was through a review that I learned about setting sleeves in flat. What an eye opener!!

Meanwhile, I was sewing, and uploading pictures to my Flickr account, but not labeling them with pattern names or numbers.  Red dress felt like an appropriate label.

In June of 2008, I wanted to give back to the PR community by writing my own reviews.  I wrote 6 reviews in one day, and the very first person to comment on my reviews was ATP.

ATP had a blog at that time, CleverGirl.org, which I started reading.

She started going through my Flickr photos and wanted to know pattern names or numbers.

She also wanted to know if I had a blog.  Yup, I do, but not about sewing.

She said I should write about sewing.

So I started writing about sewing in Sept 2008, using my Vacuuming the Lawn blog.  It never occurred to me to start another blog with a "more appropriate" sewing name.

Periodically I would think about renaming my blog, but then last year Meg at McCalls introduced me to the McCalls President at their booth at the ASE, and she said I was "from Vacuuming the Lawn".  I kind of cringed at my own blog name.    The name had no connection to sewing.

I got new labels over the summer this year.  Having Vacuuming the Lawn printed on them didn't seem all that exciting (and kind of long) so I went with my name.

So, I started thinking about what I would call my blog if I rebranded it.

My maternal great-grandmother's name was Betty Little, and I thought that would be a cool name, albeit that has nothing to do with sewing either.  And then it turned out there already is a sewing blogger whose blog name was Little Betty Sews (she has since changed it), and I didn't want to get confused with her.

I was on a work conference call and the discussion was about "unstitched" forms, which made me think about changing the name to Unstitched.  But that turned out to be a home decor blog.

I brainstormed with the temp at work, and the best name that came out of that was Jersey Stitched.  I'm from New Jersey, I live in New Jersey, I love sewing with knits (jersey), and it has a sewing term in the name.

However, after talking to many people this summer, particularly at MPB Day, the overwhelming opinion was to NOT change my blog name.  It is unique and people generally remember it (or some variation on it, like Mowing the Lawn).

And so, my blog is still Vacuuming the Lawn.

For now.  And maybe forever.