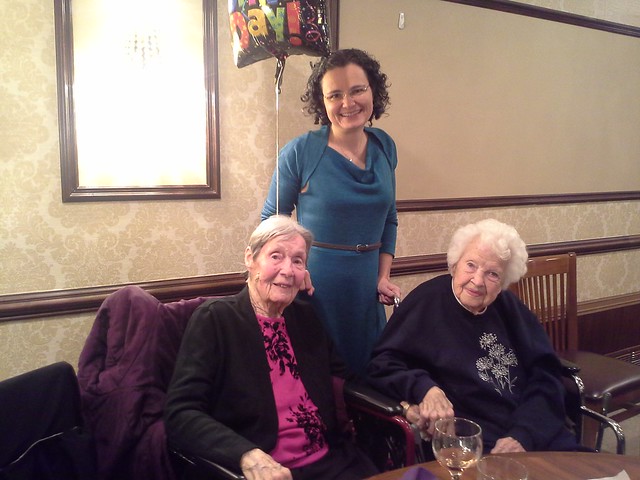 I've been feeling devastated since the election results, just like how I felt when my mother died.   I try not to use catastrophic language, but it is how I feel.  It was shocking and surprising, even though looking back, for both events, the signs were there all along.  During the year, I was feeling anxiety that he might win, especially after Brexit.  I started donating to Clinton's campaign, the first time I ever directly contributed financially to a political campaign.  Ultimately I was comforting myself with the NY Times Election forecast, which put Clinton's chances of winning at 65% at the lowest point during the summer and at 84% on election day.  The NYT forecast also included forecasts from other entities, and they all predicted a Clinton win.  My dad said that she was going to win and when is my dad ever wrong???

She lost the electoral college.

It's like I'm feeling all the stages of grief all at once.  I went to work, but I didn't shower for 3 days.  Suddenly I felt this power inside me, my 18 year-old feminist self, who chose to attend a women's college, crying and screaming at once, totally outraged at our choice of president-elect.  I suppose as much as his supporters feared Clinton, I am fearing the next administration with a Republican controlled house and senate, 2-3 possible Supreme Court appointments, and a person at the helm who has never held public office before and who encourages his supporters to engage in discrimination and violence.

Out of this feeling of devastation, another feeling emerged: an urge to "do good things".   I want to write about one of those good things here.

My great-aunt Iris has been best friends with Doris for ~75 years.  They met when they were nurses in their 20's.  I know Doris from family parties.  While I visit Iris in assisted living from time to time, I had never visited Doris.  Last year I called Doris and she said I could visit at any time, but I never did.  Post-election, I decided now is the time to get out of my introverted hermit shell and do good things.  Last Sunday, I saw Iris in the morning, saw my uncle (who I had not seen since 1999, and was visiting from TN), put flowers on mom's grave,  and then surprised Doris with flowers and a visit in the afternoon.  She is in a different assisted living facility not far from Iris.

Doris was SO excited and SO happy to see me.  She was SO talkative too!  She had a lot she wanted to tell me.  She celebrated her 99th birthday in early October, and said she was so pleased I was there, so that I could see a card that someone had sent her--it was so creative and she felt that out of everyone she knew, I would appreciate the creativity of the card the most.  She talked to me about other people who had visited her, including one who "used the device that tells you to turn left at the blinker light" (Wouldn't it be fun if Google Maps actually used such terminology?!)

I brought with me some of the things I had sewn, including the denim jean jacket, the bag from the PR contest and my aqua leather tote, to show her.  She loved the bags and wanted to know if chintz fabric still exists.

The newspaper with a headline about our president-elect was next to her the entire time, but we did not talk about the election.  We did talk about being and staying positive.  I told her I loved all the things she wrote to me on cards over the years, like "Do what makes you happy", "Keep on keeping on", and "You're a gem!".  That last sentiment I frequently used when writing back to her, and when I write to other special people in my life.  She said that staying positive is the only way to live.  I agree and later I was thinking,  I want to do positive things in my community, and donate to causes that will be impacted by the new administration.  I can't change the administration, but I can do positive things for those around me and within my community.

She stood up to hug me goodbye.  She said she hated to shoo me out, but that she had some things she needed to do before supper.

On Monday, I went to NYC to spend the day with my friend James and to have dinner with James and Tomasa.  That night, on the bus ride home, my Dad texted me.  Doris died that day (Monday).

Be well and be kind and be gentle to yourselves and each other.