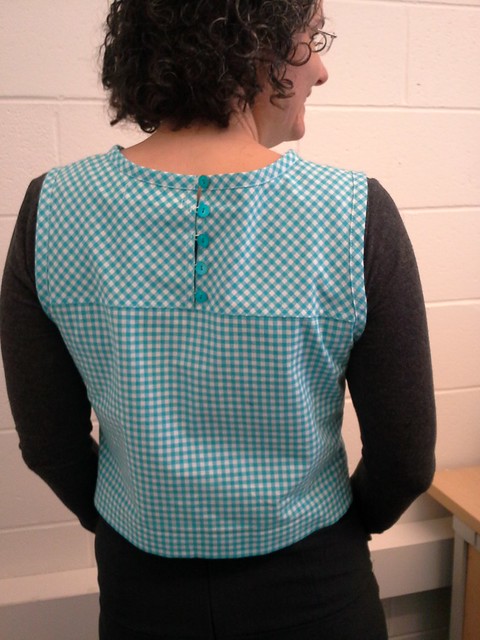 Thank you for all your sweet words about my sweater sewn from a blanket!!  It is a really great sweater to wear and I want to make more in varying lengths and neckline styles.

I have wanted a turquoise gingham shirt for several years now.  I started a simple shell last summer, but then I wanted to make a bag for a friend's birthday, and I never got back to it. I rarely have UFOs, but there it was, hanging in my sewing room for 6 months. Why not finish it over Christmas break when it's seasonally inappropriate? 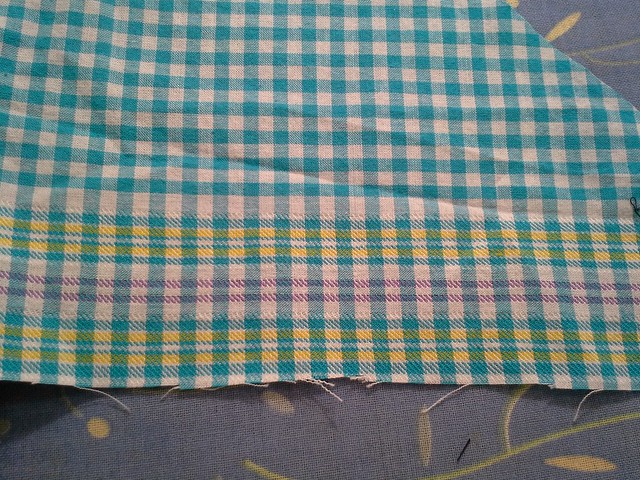 The fabric is 100% cotton from Mood, with 1/4" checks, and while it looked like yardage on the roll, it was actually panels that ended with this detail which I didn't use. 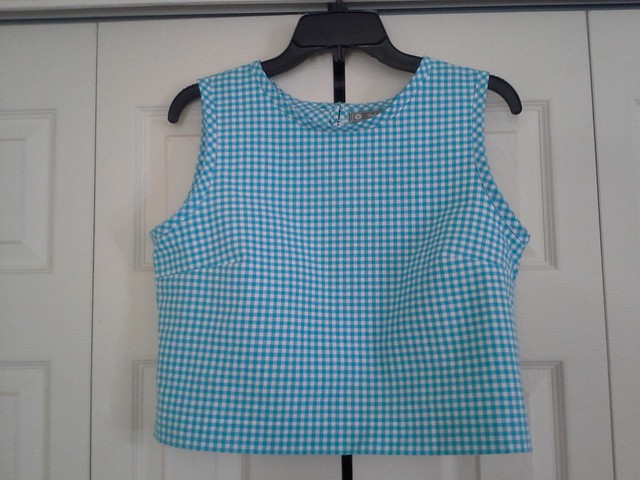 Finished front.NL 6483 view C was my starting point.  I traced the 12 at the shoulders/neckline and a 14 everywhere else, and actually muslined first.  I wound up doing a minimal SA at the shoulder, and 1.25 SA on the sides.  After reading popo's review of NL 6483 where she cut a yoke onto the upper back (to highlight lace) I knew I wanted to highlight the bias of the gingham in the same manner, so I also cut a bias yoke.  I also eliminated the CB seam so that the gingham would be in one continuous piece under the yoke. 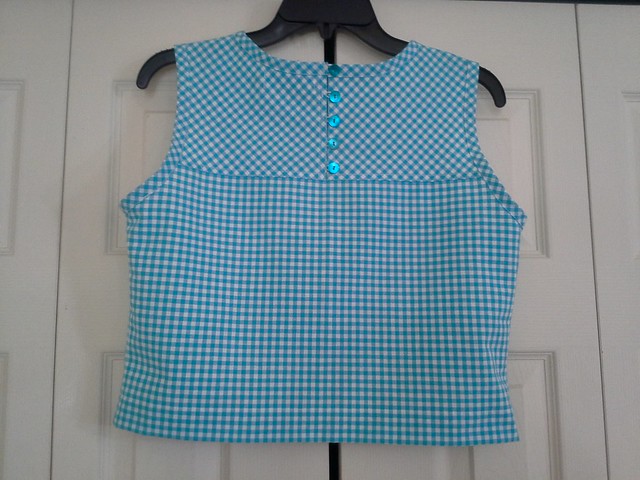 It was up to the point where the shell was sewn together, but needed bindings and a hem. 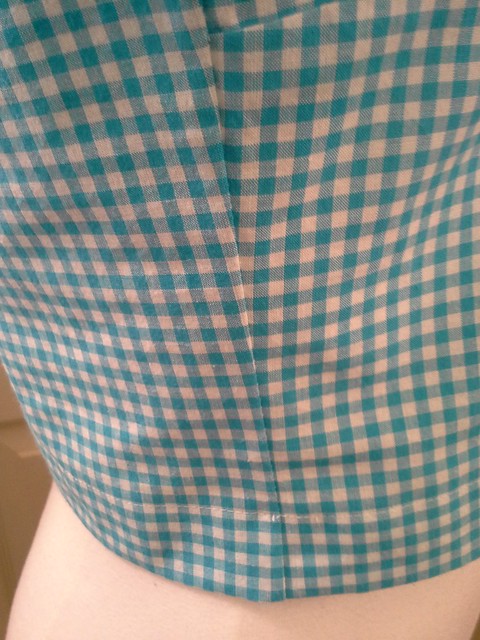 First I took the time to match the gingham under the dart. 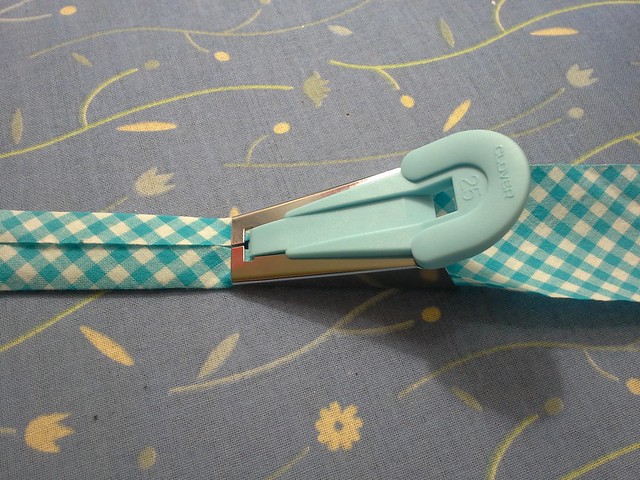 Then  I got out the Clover bias maker.  While I have made my own piping before, I have never made my double fold bias tape til now.   Like making your own piping, it's pretty easy to make your own bias binding.   Cut the strips on the bias, push it through the little plastic thingie, pull it out and iron it to make single fold bias tape. Then fold in half and press again to make double fold bias tape.  When cutting the strips, I made sure the turquoise X's were straight down the middle to try to get some consistenecy of placement among all strips.  Also, I don't do continuous bias, I just cut separate bias strips a little longer than the length I need, three strips in total: one for the neckline and two for each armhole. 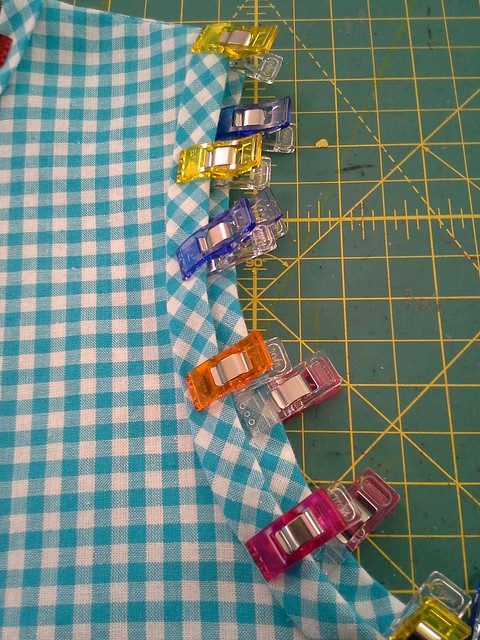 Orignally I was just going to sew single fold bias tape on the inside of the armhole and neckline, but my bias binder is quite large, and so the idea of double fold was born.  I was afraid that bias binding on the bias yoke might be too much bias, but I was reassured on Instagram that it's not and forged ahead. 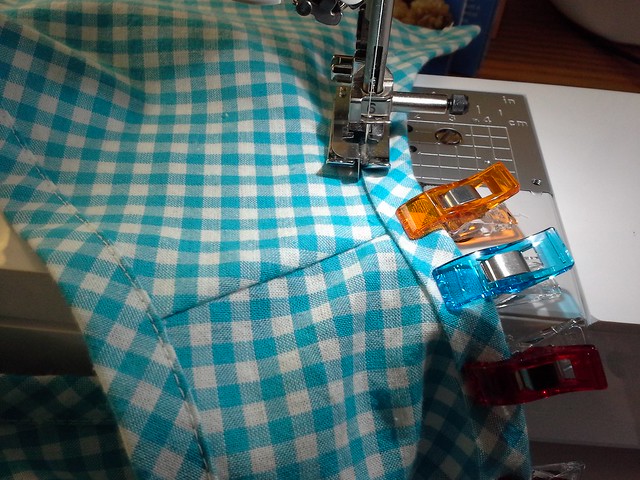 I used the flange of my blind hem foot as a guide for sewing on the binding at a consistent width. 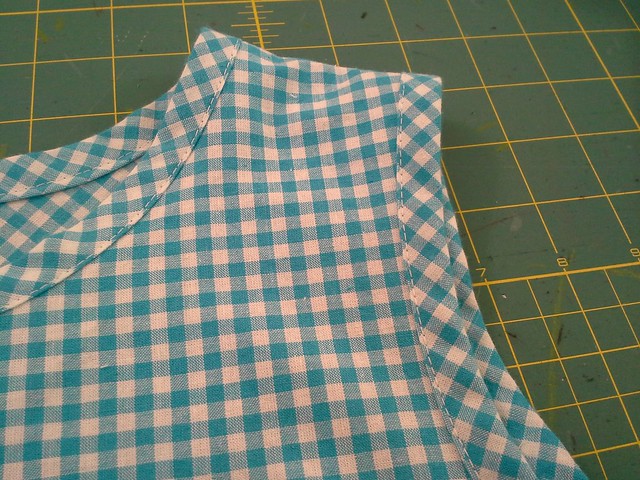 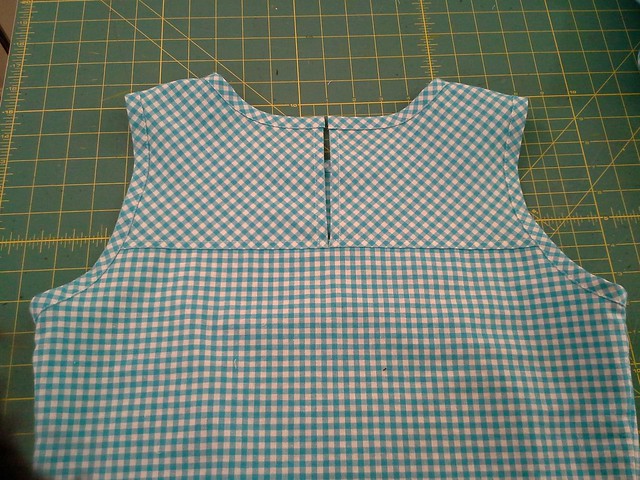 Time for buttons and button loops! 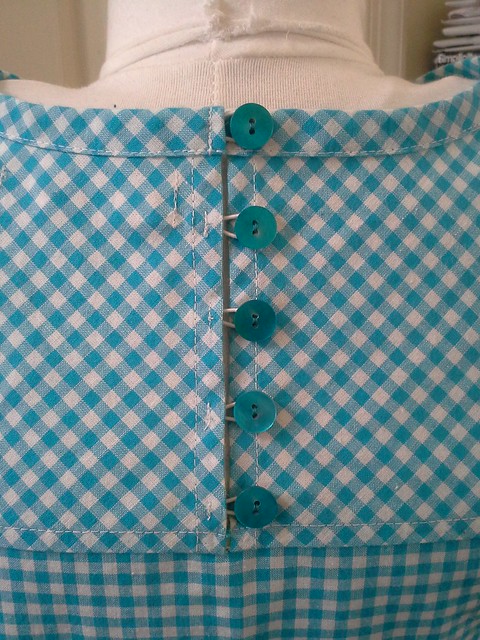 When I sewed the button on at the top, the whole yoke collapsed in an unattractive manner, so I wound up sewing 5 buttons on.  The buttons were purchased at the ASE in the Soutache booth.  I think they are dyed shell buttons.  The button loops are elastic cord.   This means I don't have to actually unbutton it to get it over my head--the loops just stretch and the neckline is pretty wide to begin with.

I hemmed it with a generous hem to give it a  somewhat cropped look.  It looks nice but mainly it was to insure that I had enough length. If the shell was too short, I could always undo the hem, press it and sew it with a smaller hem to make it longer. 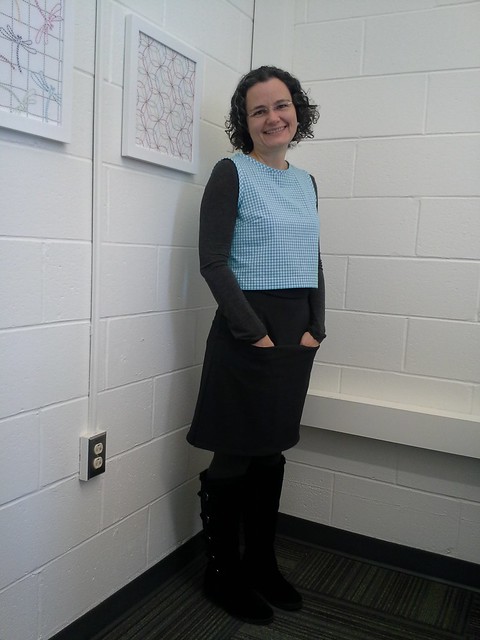 I wore it to work on Friday with a gray bodysuit underneath, a gray Vogue 1247 skirt I sewed almost 5 years ago, gray sweater tights and my black winter boots.  I got tons of compliments on it!  I will say that it does not really fit all that well, I think I needed to leave more of a SA in the bust and potentially cut the 14 at the shoulders/neckline to give more length from shoulder to bust (an area that I'm actually short in, so usually my one-size-smaller in the neckline/armholes plan works).  Somehow the bust dart is too high.   I don't know why I didn't notice that at the muslin stage.  Maybe I need to try my muslin on again. 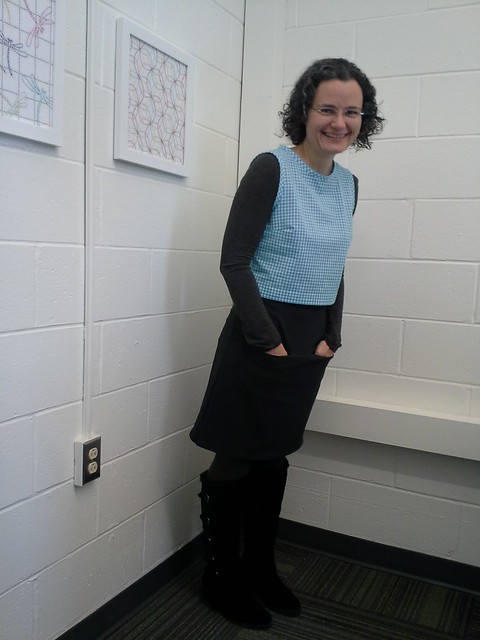 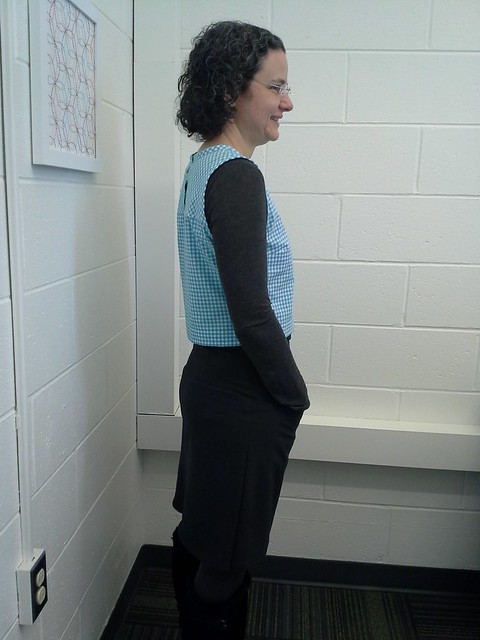 Side view, hands in front pockets.
Even with the fit issues, I think it will get a lot of wear, because it's such a happy piece.