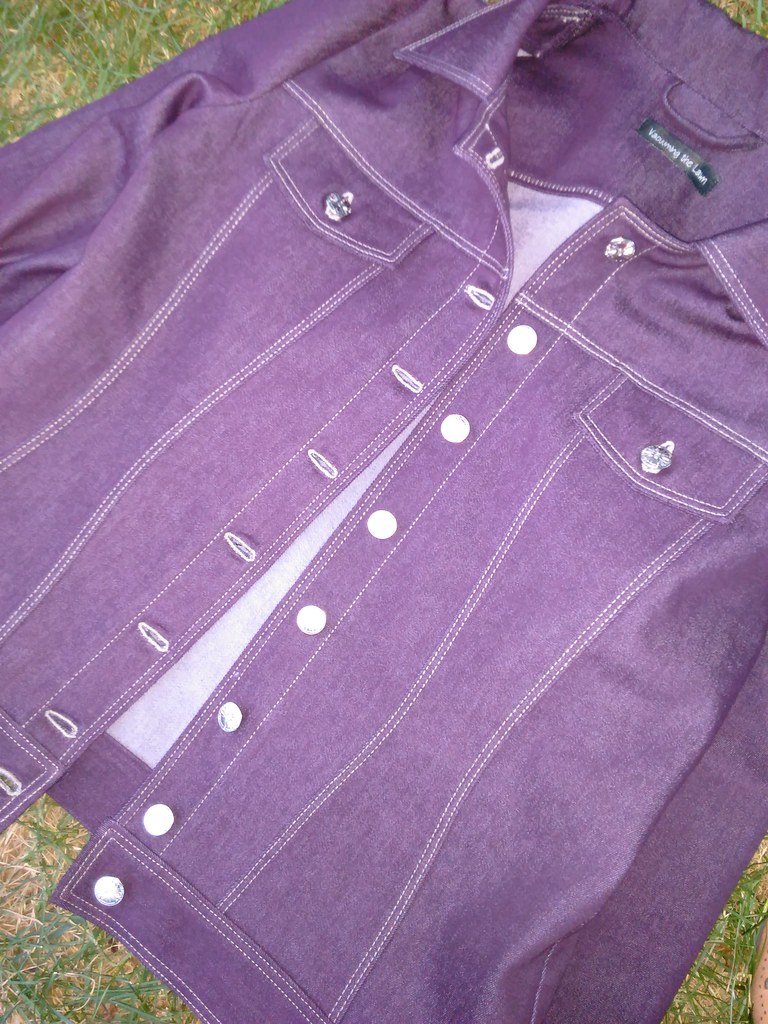 Thank you for all your kind words about my StyleArc Stacie jacket!! 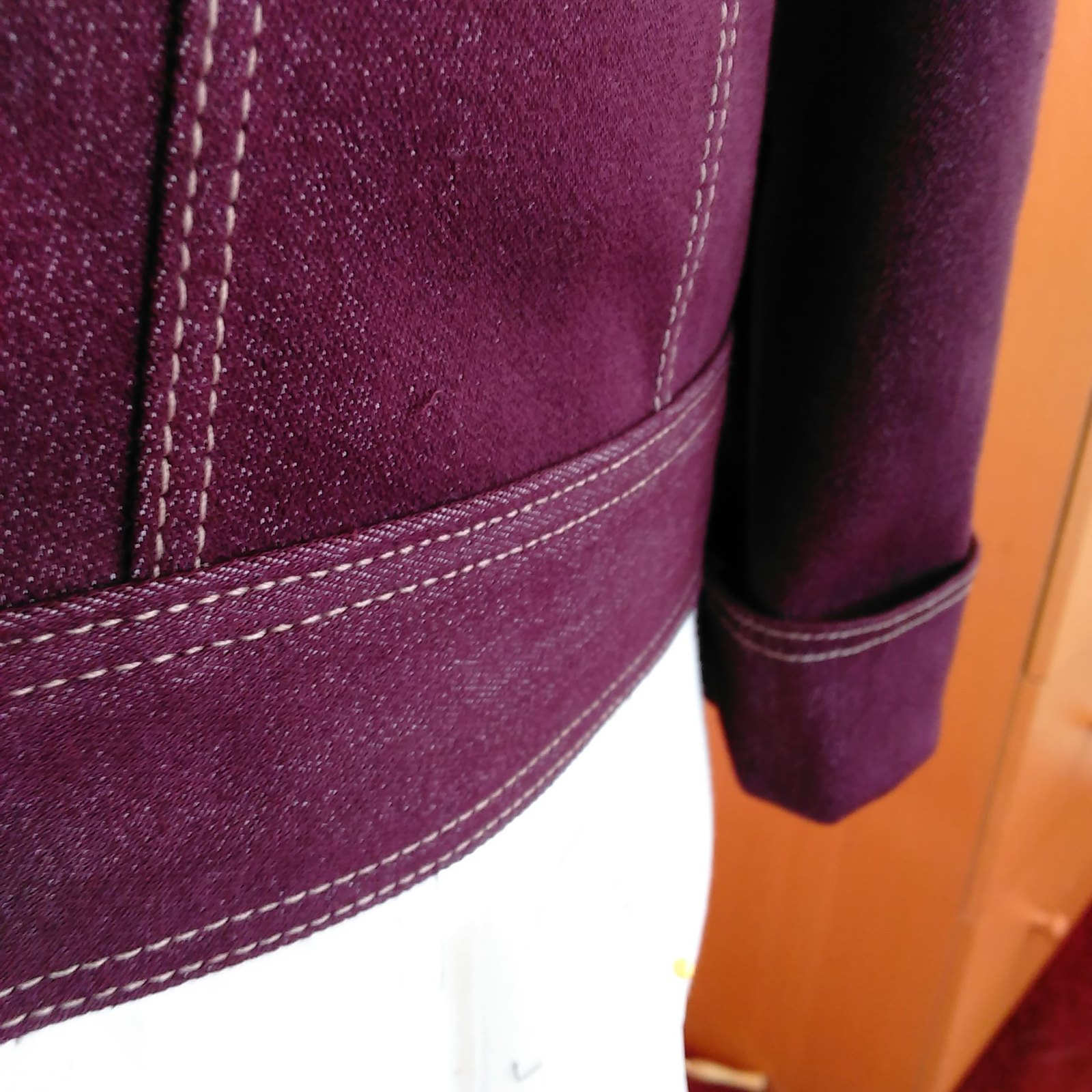 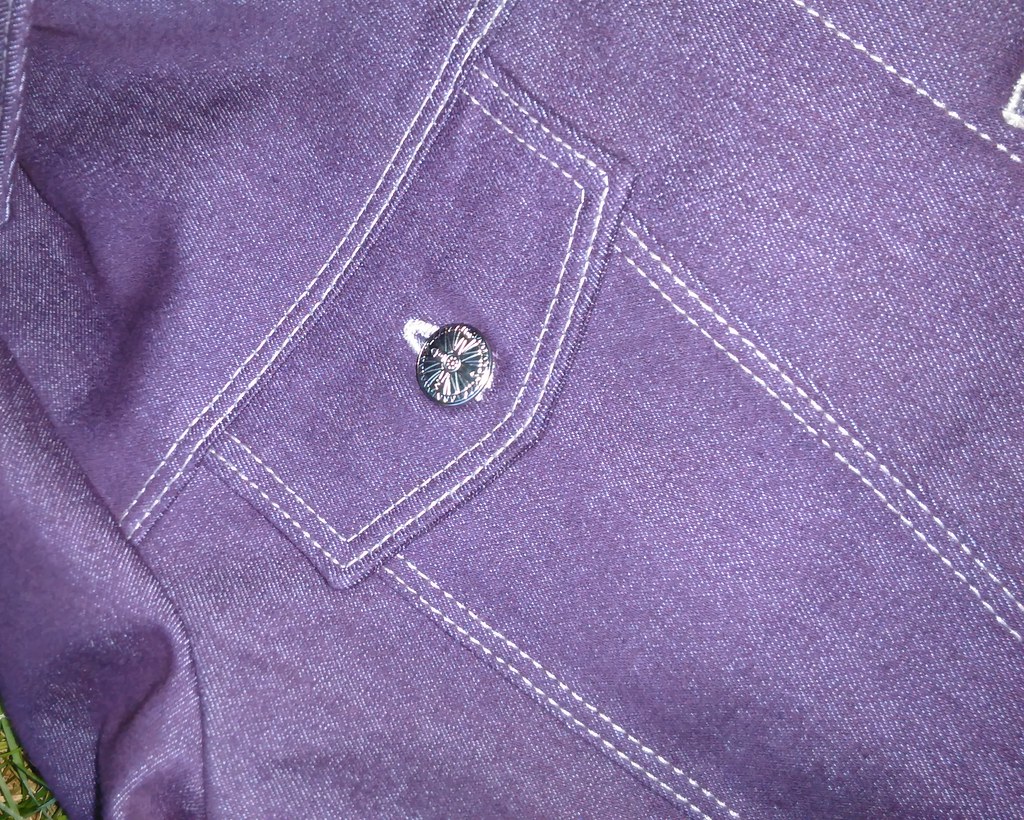 Since I have so much to say about this jacket, I'm divvying it up into several posts.   This post focuses on the topstitching!!!  Topstitching is NOT for the weak; there is an "ugh" moment when it doesn't look great, but there is a HUGE rush when it turns out looking great! 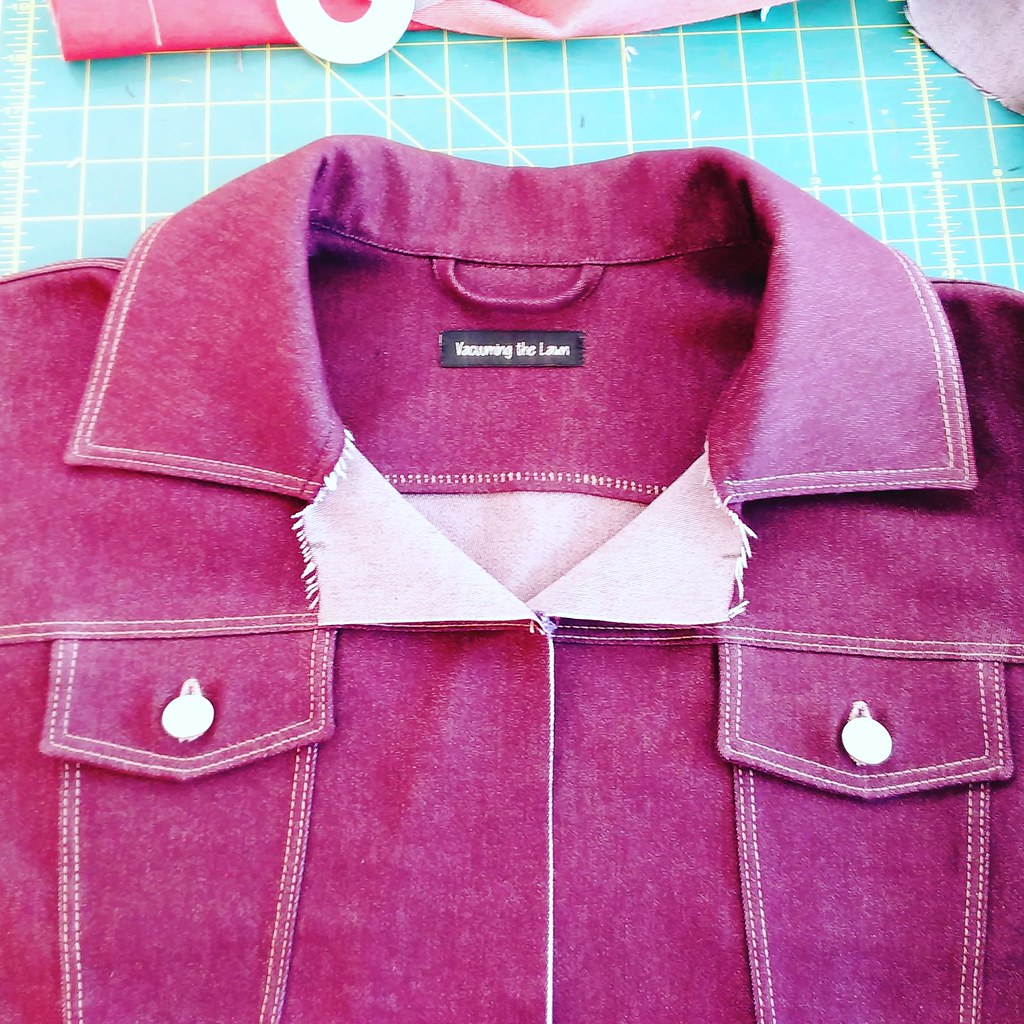 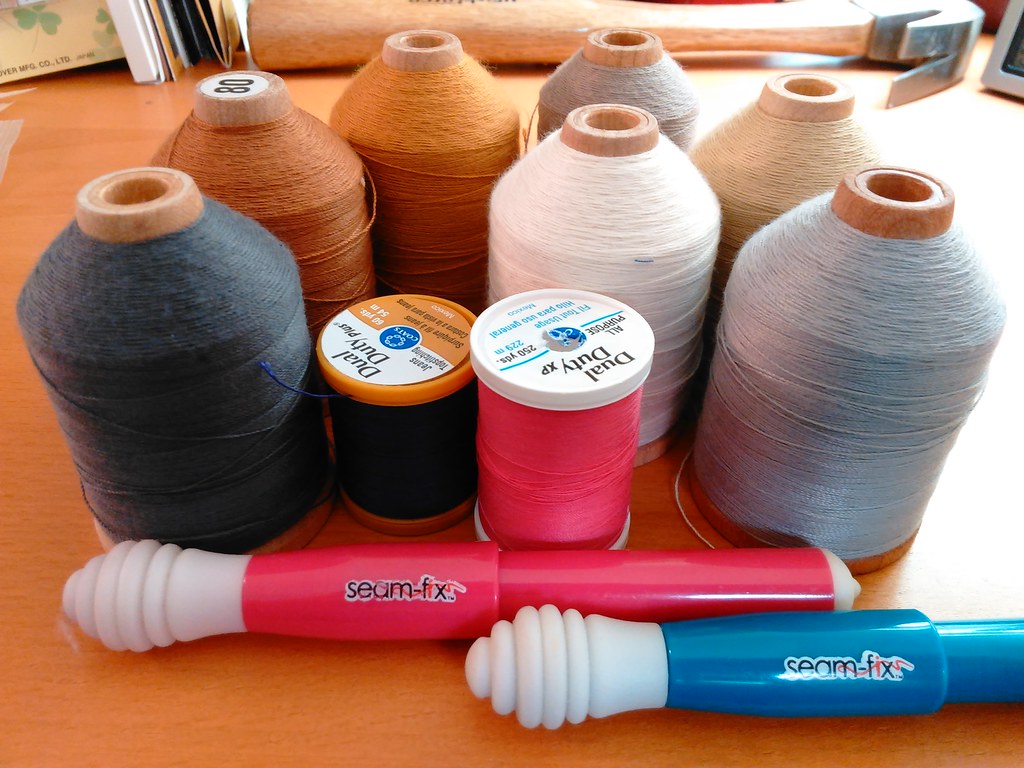 Also included, the "Seam Fix" which I discuss further down... 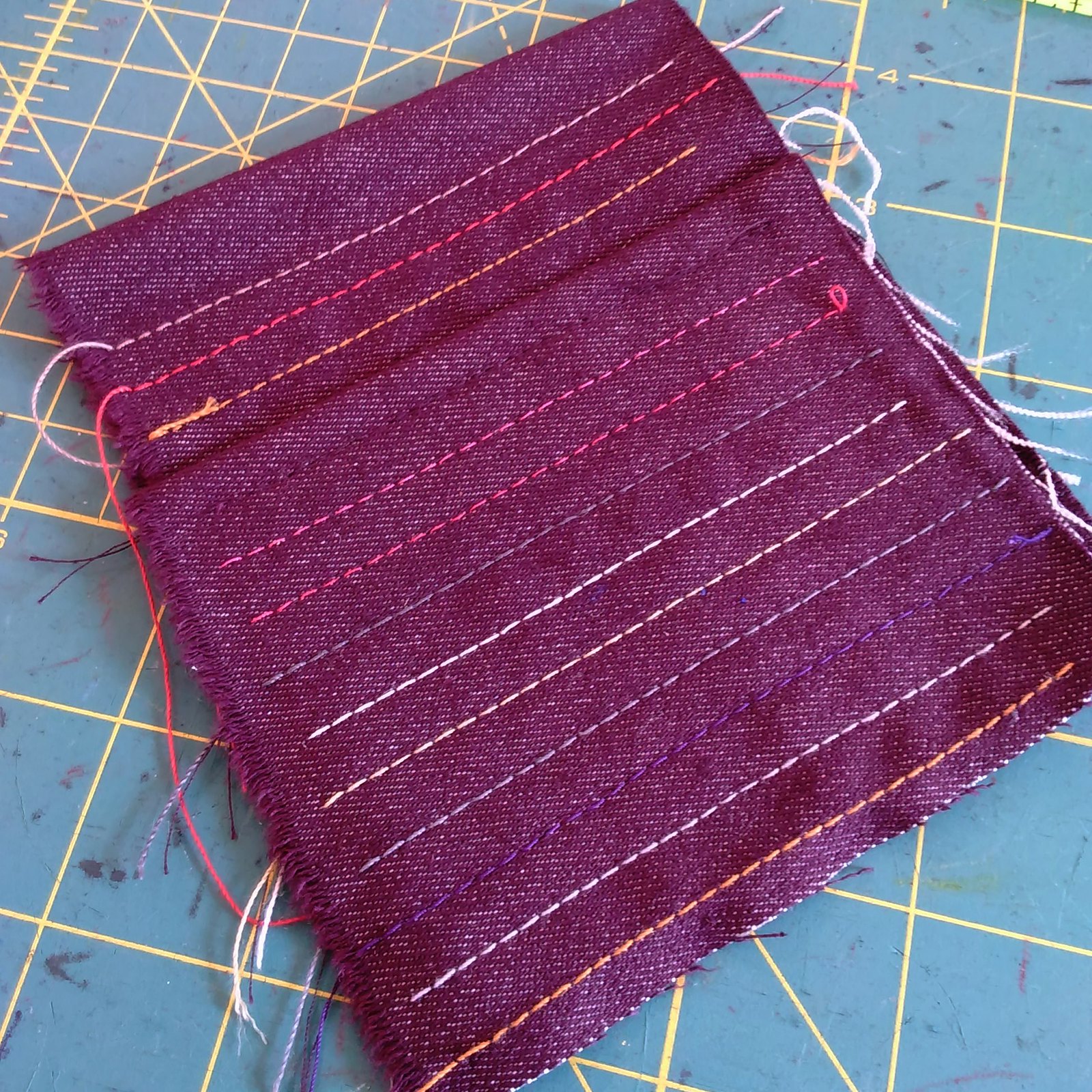 Sew, Jean Margaret had used pink topstitching thread on her purple jean jacket, so I auditioned that color as well as shades of gray, white, and neutral.  The pink colors had strong support on IG, but I ultimately went with a color called "velvet fog" (from the 80 wt Wawak selection) that felt the most like "me" and also had a vaguely lavender appearance when sewn onto the eggplant colored fabric. It also has a high contrast with the fabric which makes it pop.  The 80 wt thread is also super thick and really stands out, and one spool of that topstitching thread has 750 yards on it, which is fabulous. 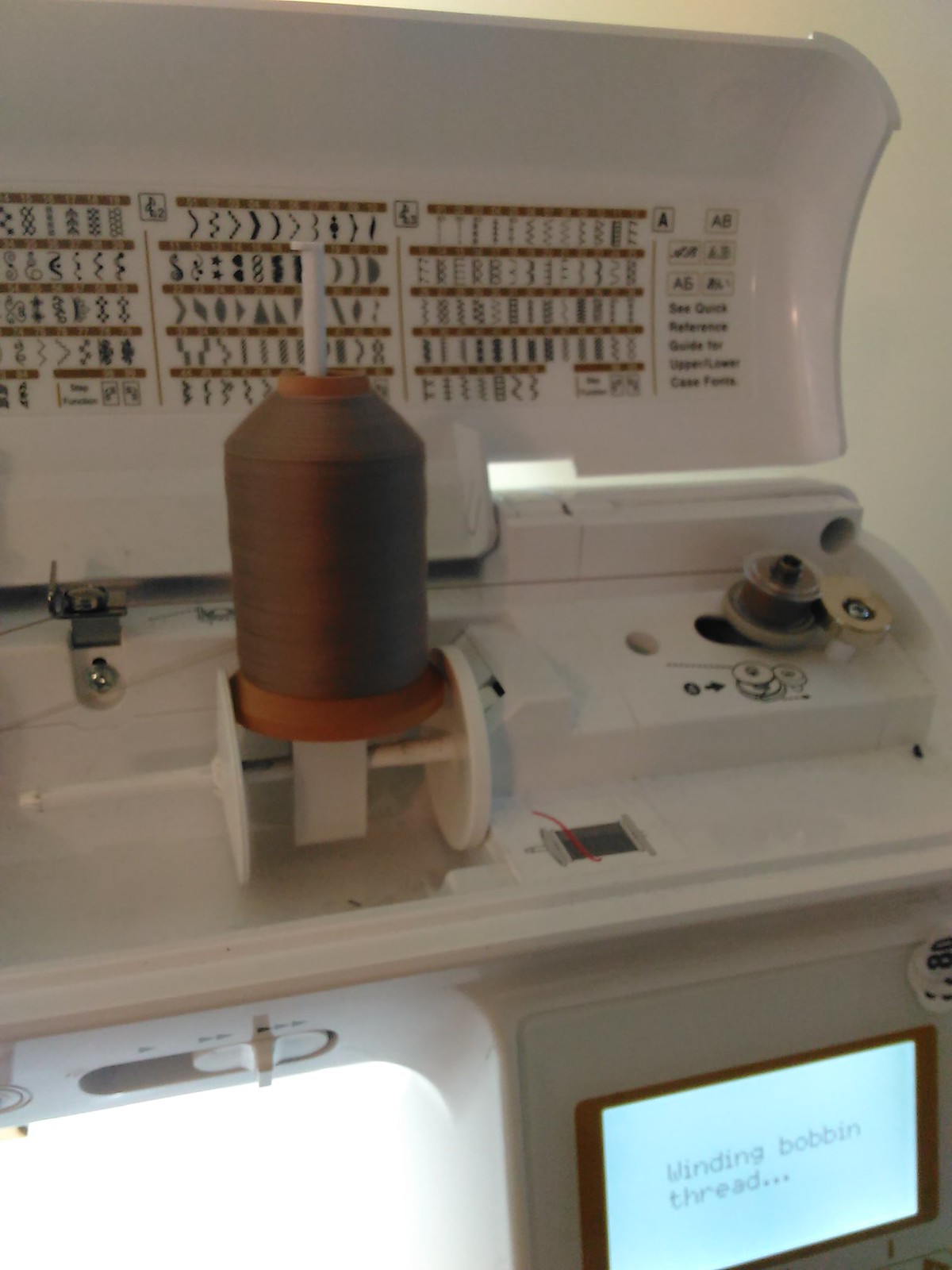 Hammer Time vs folded up fabric vs the Jean a Ma Jig
For some but not all thick intersections, I used a hammer to flatten the seam allowance (using a scrap between the fabric and the hammer) and a folded up scrap behind the presser foot to keep the foot level. For SUPER thick intersections, I hammered the seam allowance and used a Jean A Ma Jig (hump jumper) which worked like a charm!

Stretch Twin Needle Stitching
For any seam that was topstitched that was either straight or curvy, but did NOT have a corner ,I used a stretch twin needle (since I was using a stretch woven) on my Brother Project Runway sewing machine.  I really needed help to keep the stitching straight, so I used the overlock foot that came with my BabyLock Soprano.    The overlock foot has a wide and deep ridge on it that I could put the non-topstitched part under, and it fit under there really nicely, as the topstitched part is always on multiple layers (like the seam allowance is pressed under the topstitched part). 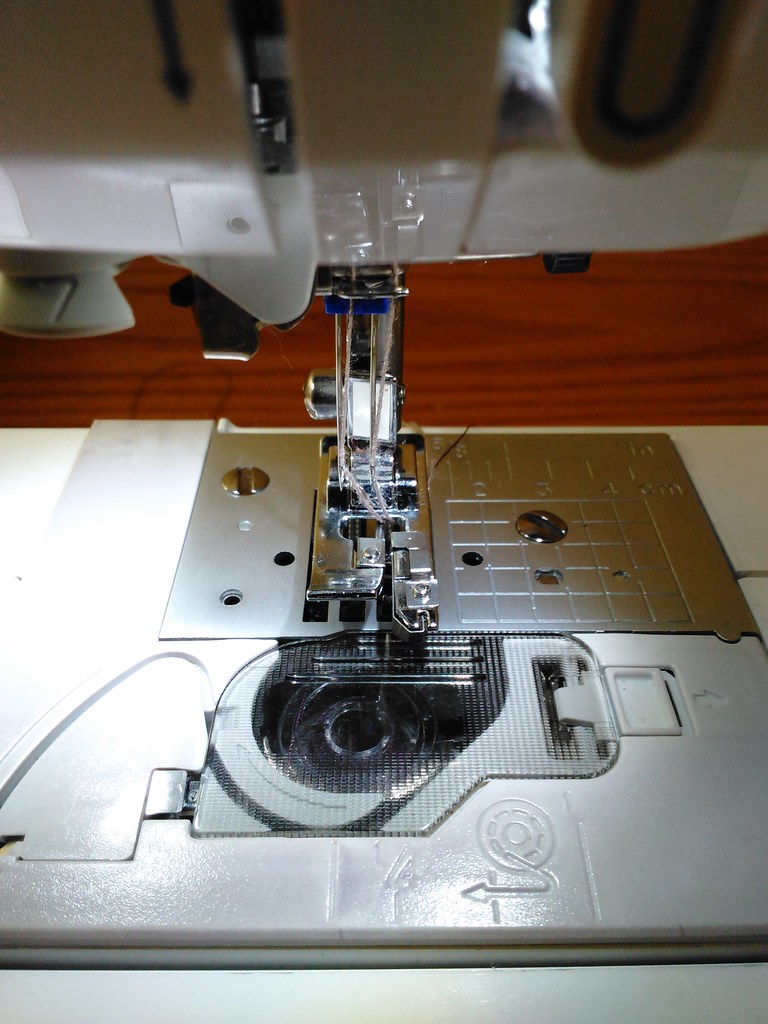 By some small miracle, the stretch twin needle I used just barely fit into the opening of the overlocking foot, on the 1.5 4.5 setting, which also made it the perfect distance from the edge.

I used regular Coats and Clark poly thread in color 3190 in the bobbin for all stretch twin needle stitching.

I will say it was not easy to get the topstitching thread through the eyes of the twin needle.  This required a little bit of patience, as well as cutting the thread where it looked "the thinnest" and threading "the thinnest" part of the thread into the needle. 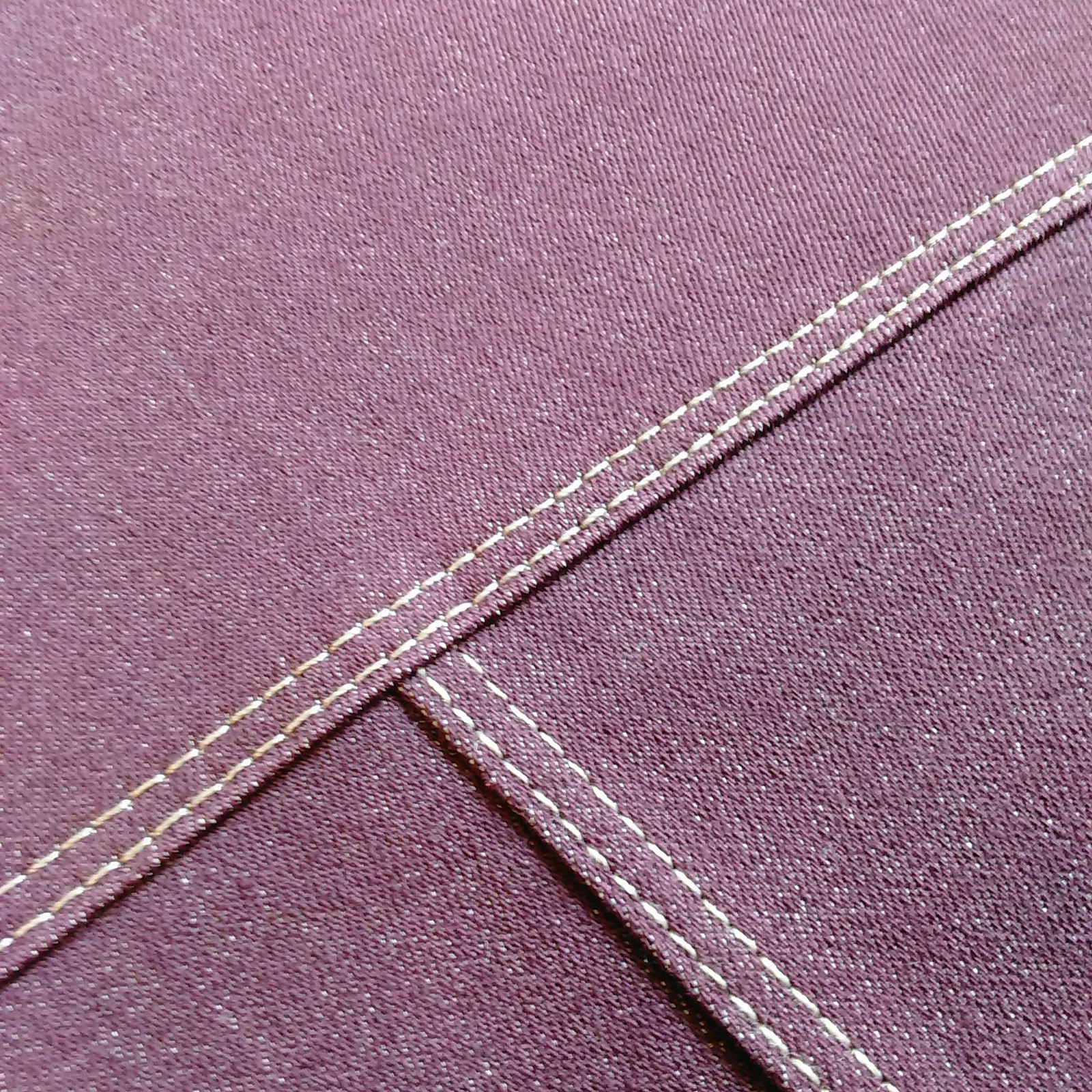 Also I could not use the thread cutter on my Brother, as it would seem to get jammed up so I cut the threads by hand.  I actually put a sticker over the "cutter" button on my machine as a reminder to NOT press it.

When I started stitching, I held the long thread tails out of the way. 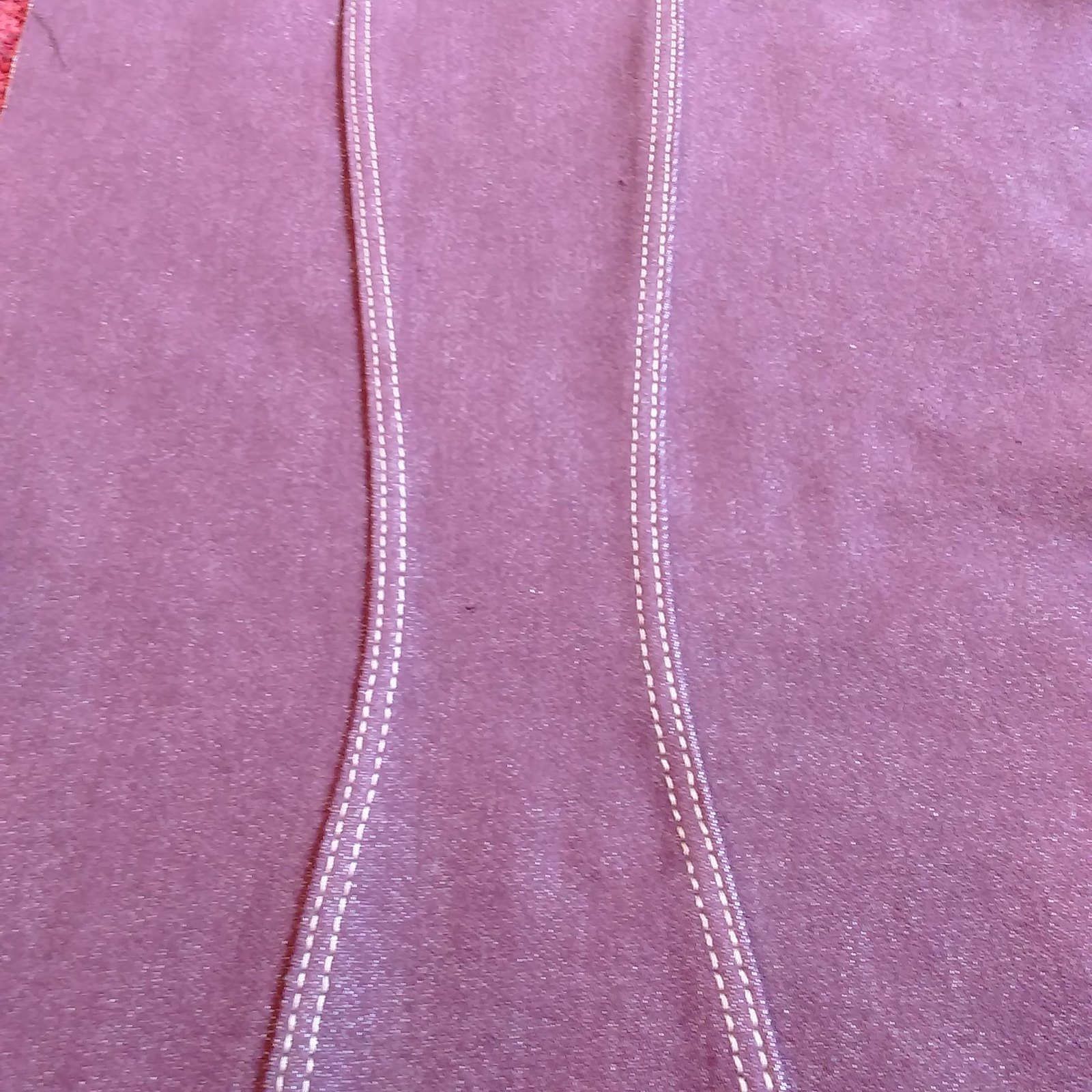 Single Needle Stitching twice
When I sewed my Jalie Eleonores, I had written that you can't pivot with a twin needle, and a reader said that you can.  I really had trouble doing this, and definitely need to practice more.  So instead, for any topstitching that had a corner, I used a single needle on my BabyLock Soprano, twice. 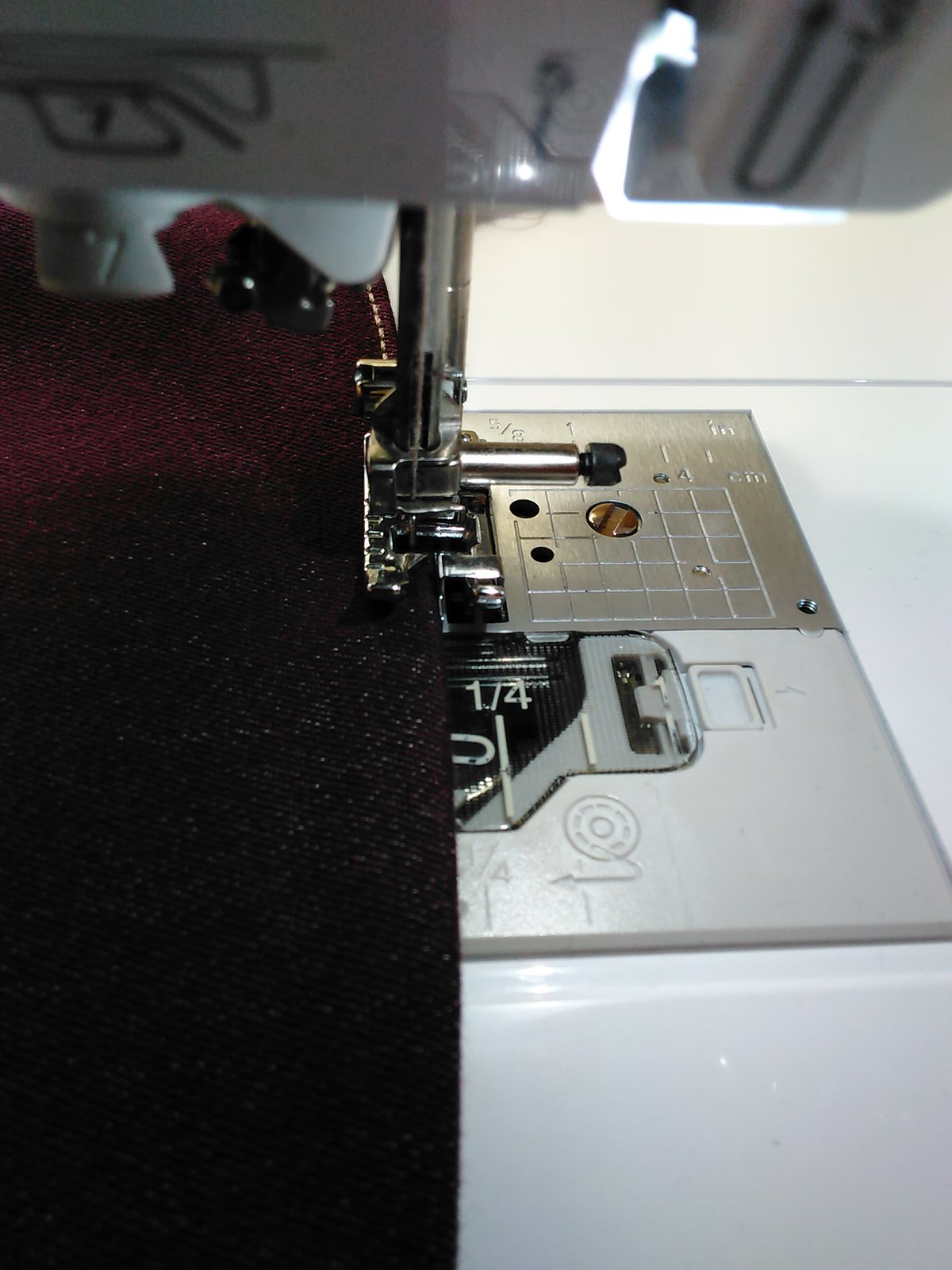 Stitch in the ditch foot

For the second pass, I used the quarter inch quilting foot that came with the machine.  I put the edge of the fabric up against the flange, and stitched at 3.5, 3.5, 4.0 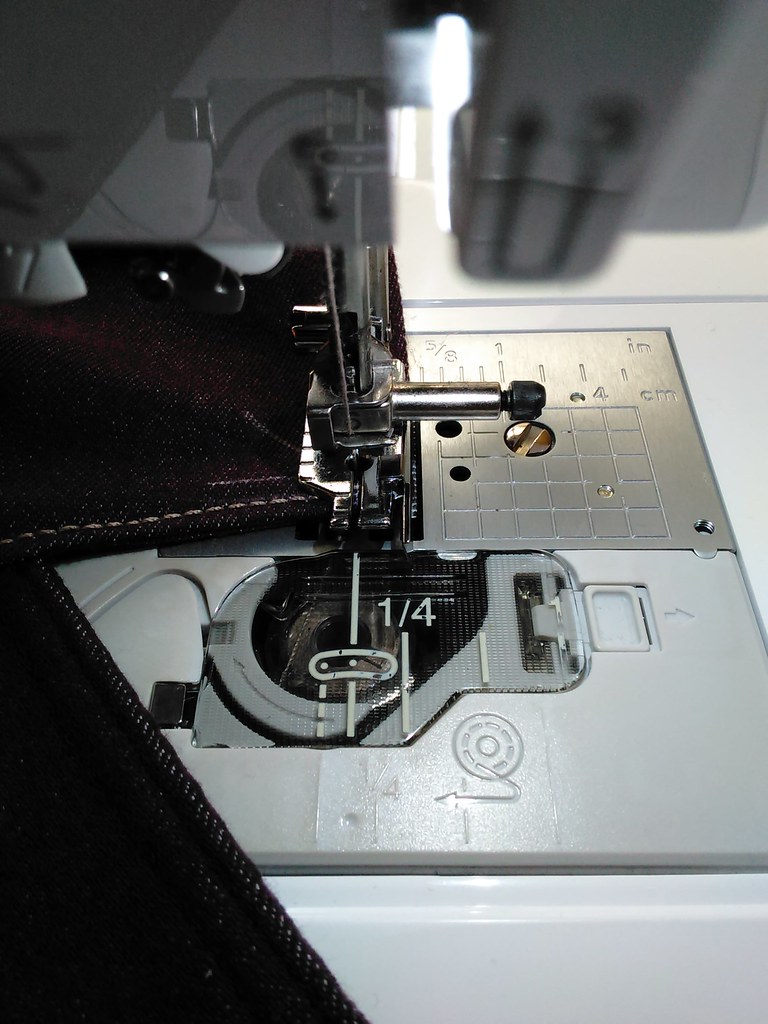 As far as knowing where to pivot, I drew with my Chakoner and a quilter ruler 1/8 and 1/4 from each edge with a diagonal line to show exactly where the corner is.  Of course, when your stitch length is really long for topstitching, it is hard to "hit it" right on that spot.  Sometimes it's a little short; sometimes it's a little long; sometimes you nail it. 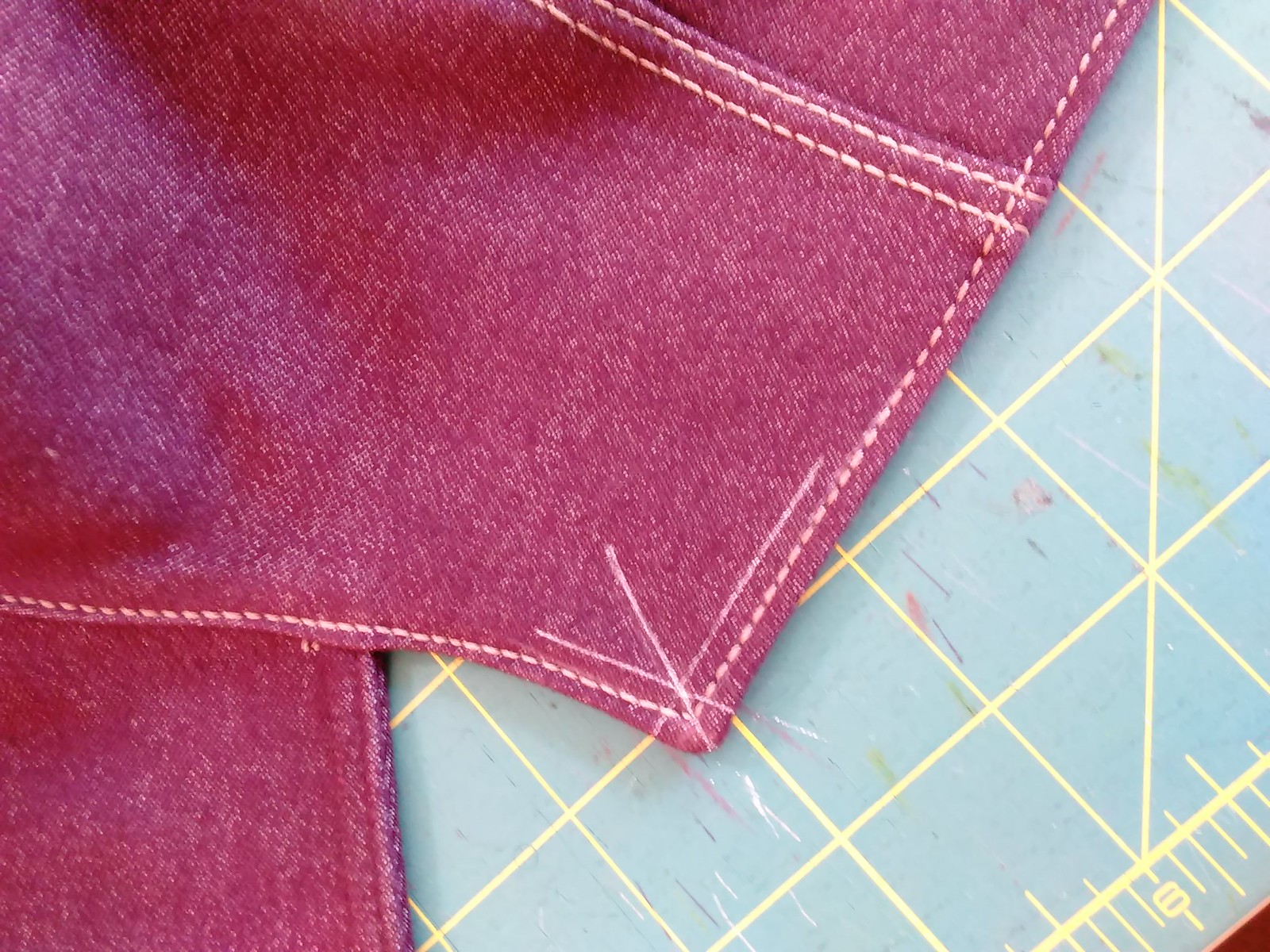 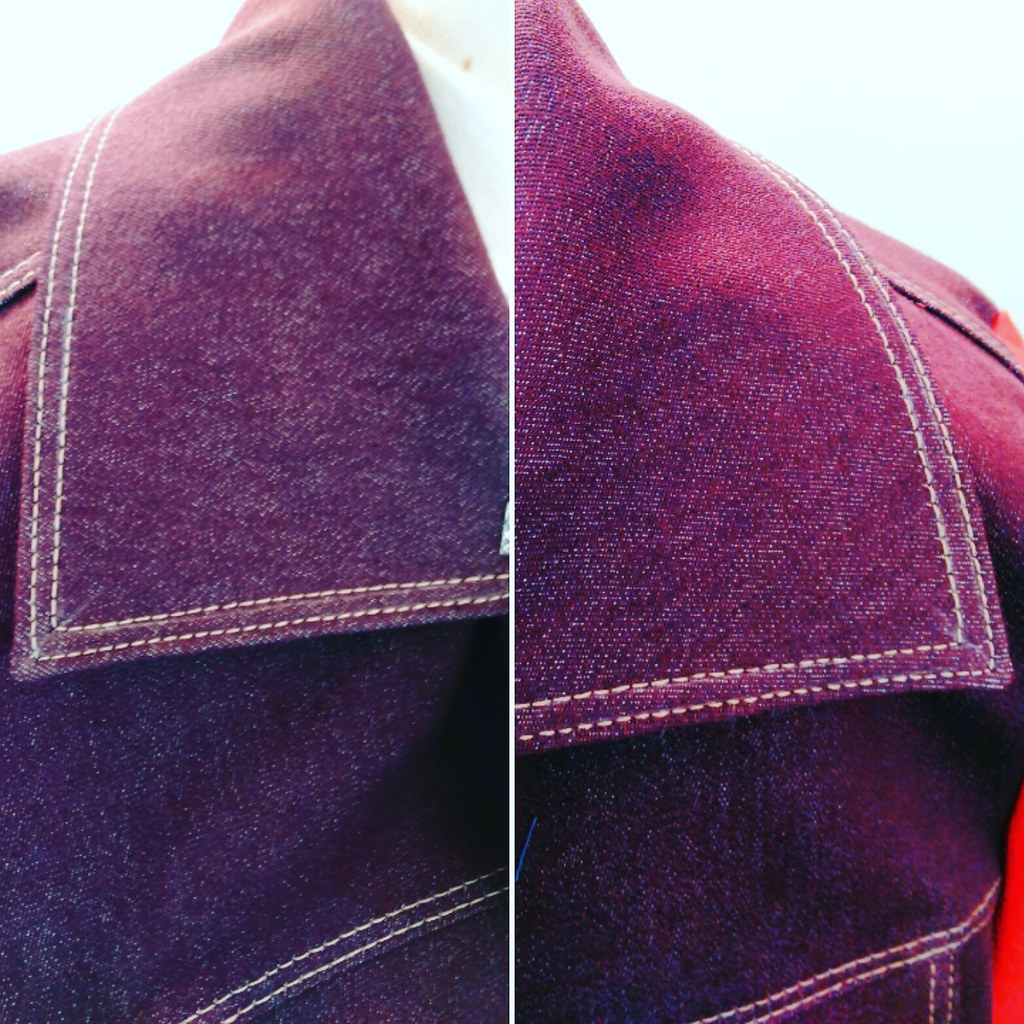 I tried a few different pocket shapes and also tried twin needle before using a single needle twice on the flaps, choosing the best ones, and calling it a day. 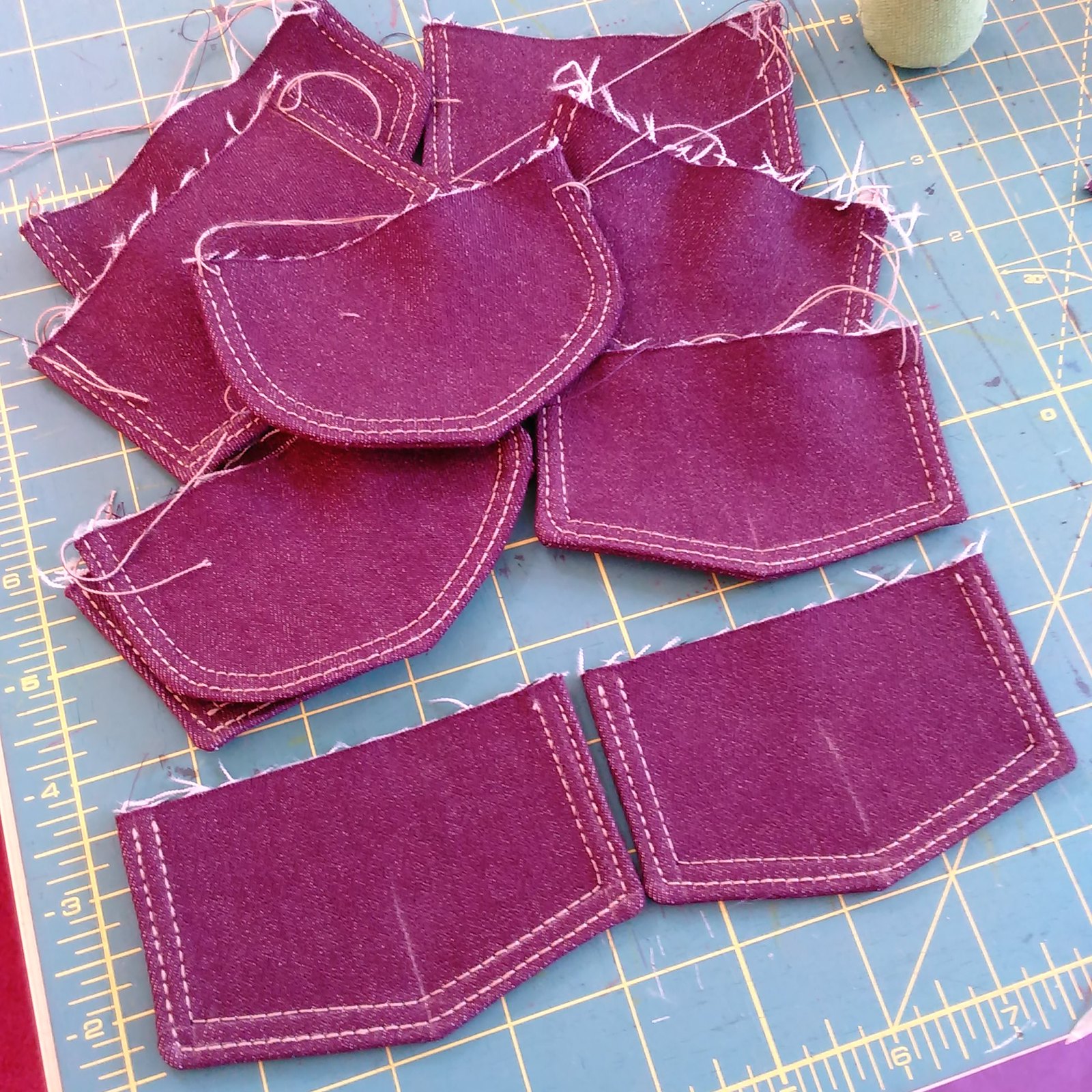 Since I used a size 14 topstitching needle for this, I could use my automatic threader and it worked just fine.  However, I could not use the thread cutter (just like my Brother) as it didn't seem to want to cut the thread and so I cut the threads by hand.  I also put a sticker over the "cutter" button as a reminder to not press it on this machine either. 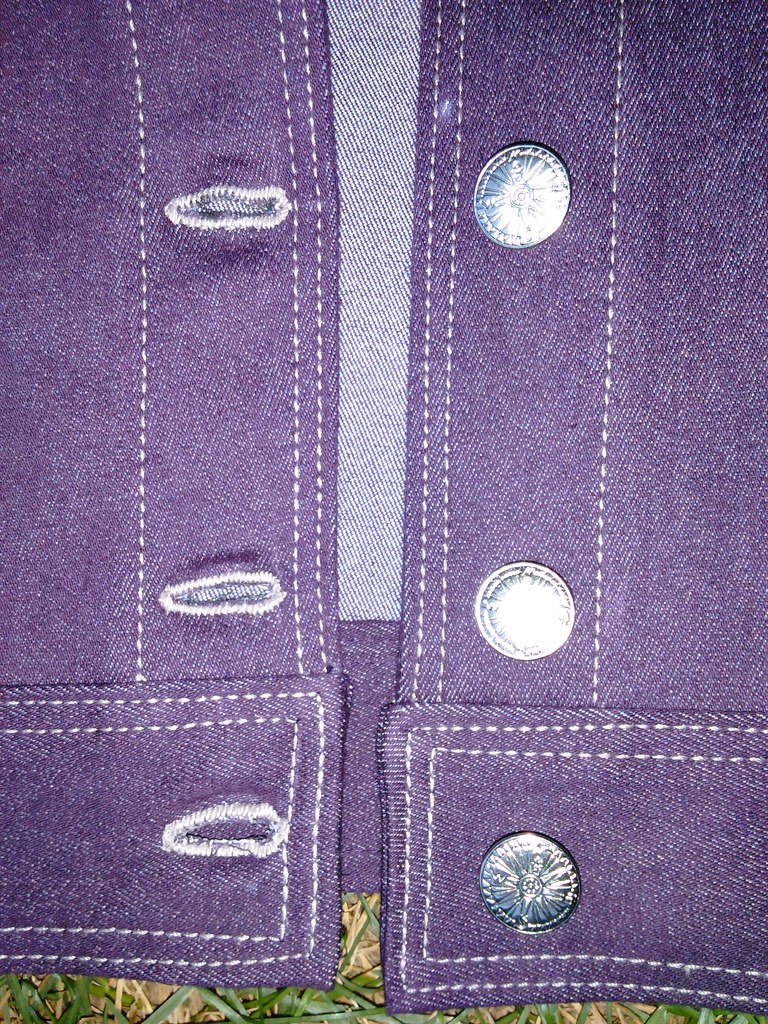 Admittedly, totally wonky stitching here on the corners, but most people are never going to look that closely, and it was the best I could do.

Single Needle Stitching just one row and using the "reinforcement" stitch to secure the stitching
The "placket" of the jacket had just one row of stitching down the front, so that meant the top of the stitching would be out in the open for all to see and not covered by a seam allowance (as most of the topstitching was--like those front panels--where the topstitching starts and stops is hidden within the seam allowance as the jacket is sewn together.  For those places I did not reverse and go forward like I normally would--I just started stitching, holding the long thread tails while I stitched.)

So, for the single needle row of stitching down the sides of the placket, instead of starting going backwards and forwards, I used the "reinforcement stitch" on my BabyLock Soprano, which creates a really cute little knot.  I used Fray Check on this knot to help. 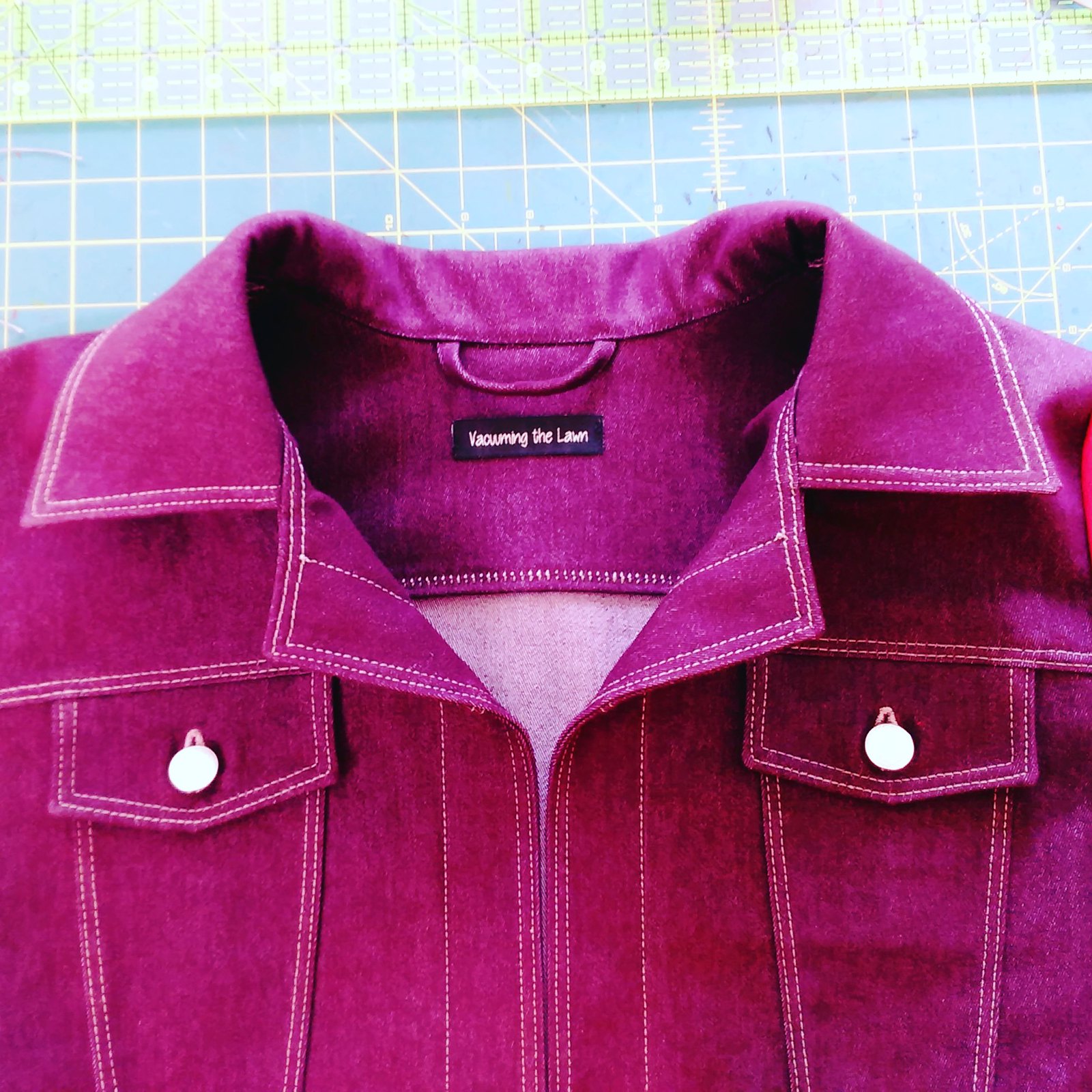 When topstitching the band, the reinforcement stitch didn't look so hot, so there I stitched forwards and backwards, then used Fray Check on that area as insurance.  I also started and stopped the stitching on the side seam, which felt like the most inconspicuous place. 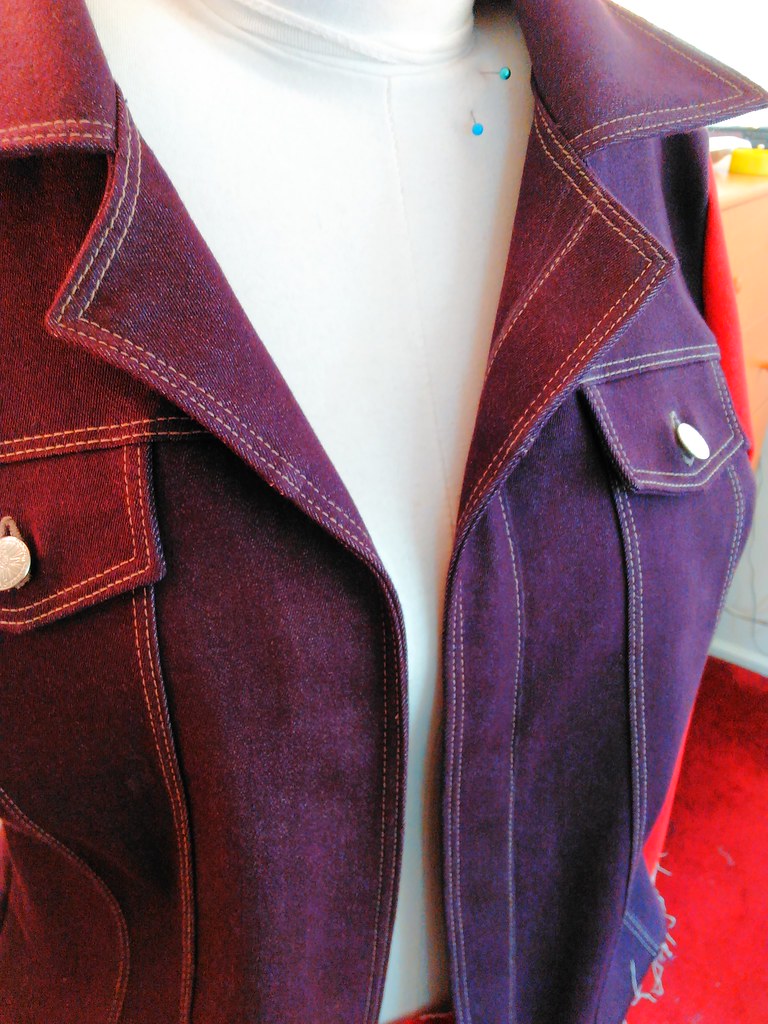 Topstitching on interfaced vs non-interfaced areas
I had not interfaced the cuffs and honestly, the topstitching does not look as good there as it does everywhere else, which was either interfaced and/or stitched on top of the pressed seam allowance.  Next time I will interface the cuffs too.

(NOTE: The StyleArc pattern says NOTHING about using interfacing.  I interfaced the collar, placket and pocket flaps, and next time I will interface the cuffs too.) 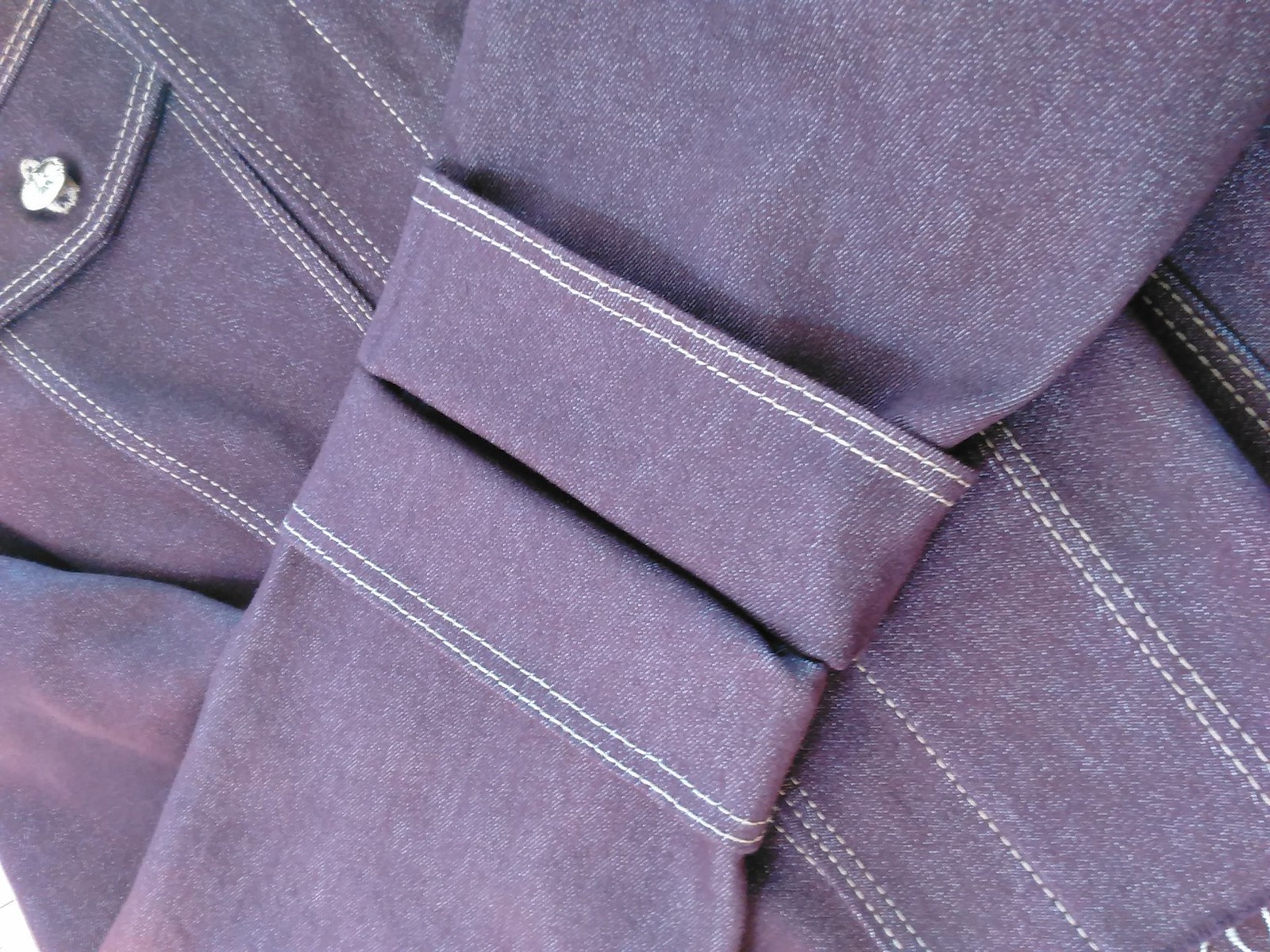 I totally forgot til seeing this picture, I used the "tissue paper" method to keep the cuffs from stretching as I stitched.  If I had interfaced them, I would not have had that problem! 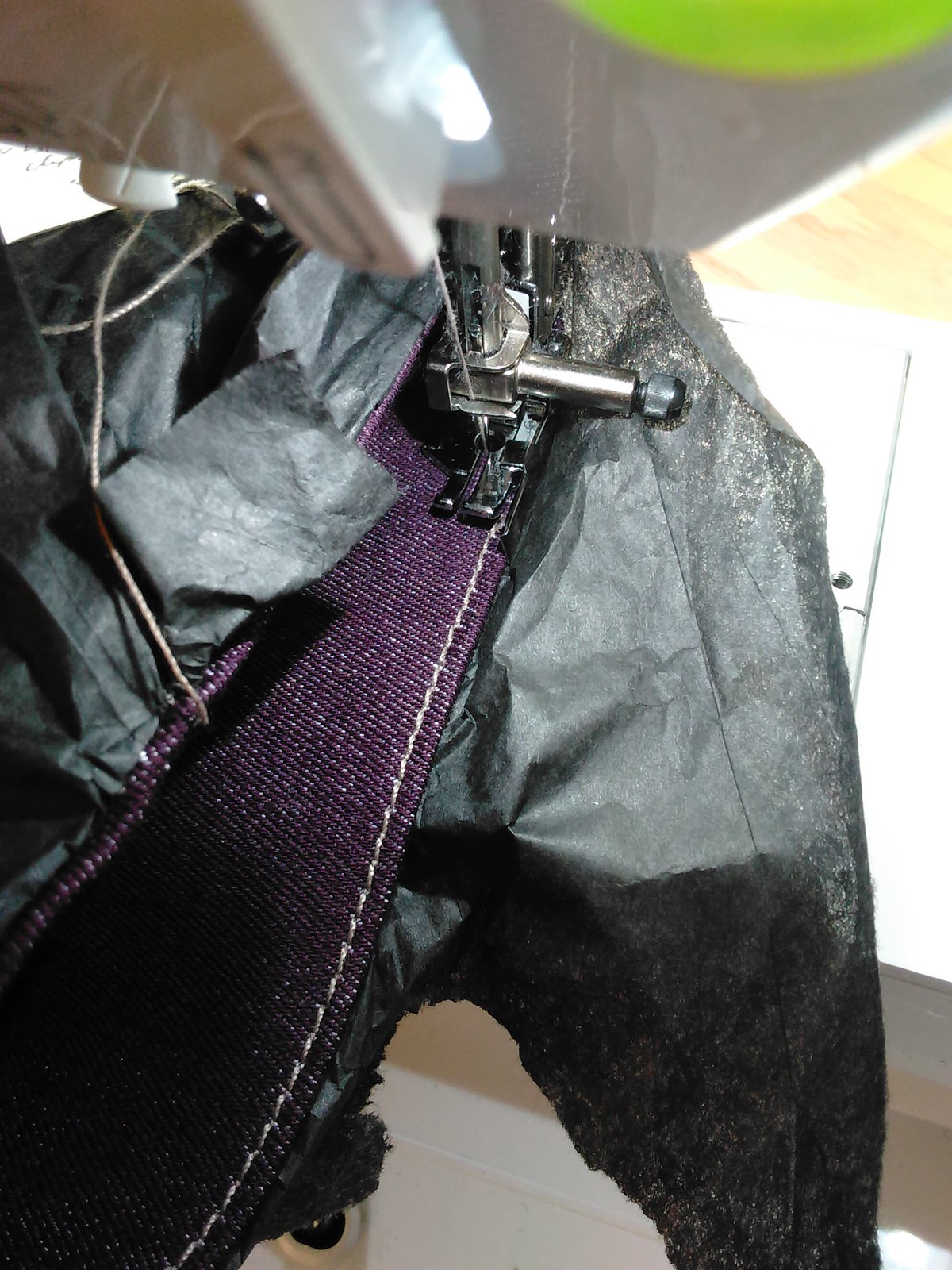 Undoing topstitching
I am a perfectionist so I got a lot of practice ripping out topstitching.  Basically, I took my tiny scissors and cut every other stitch, then pulled the fabric apart to release the stitching, and used the Seam Fix rubber thing to help pull out the stitching.  There are parts that are definitely NOT perfect, but I tried 2 or 3 times and felt this was the best I could do.  Looking at my 3 RTW jean jackets, they are not perfect either! 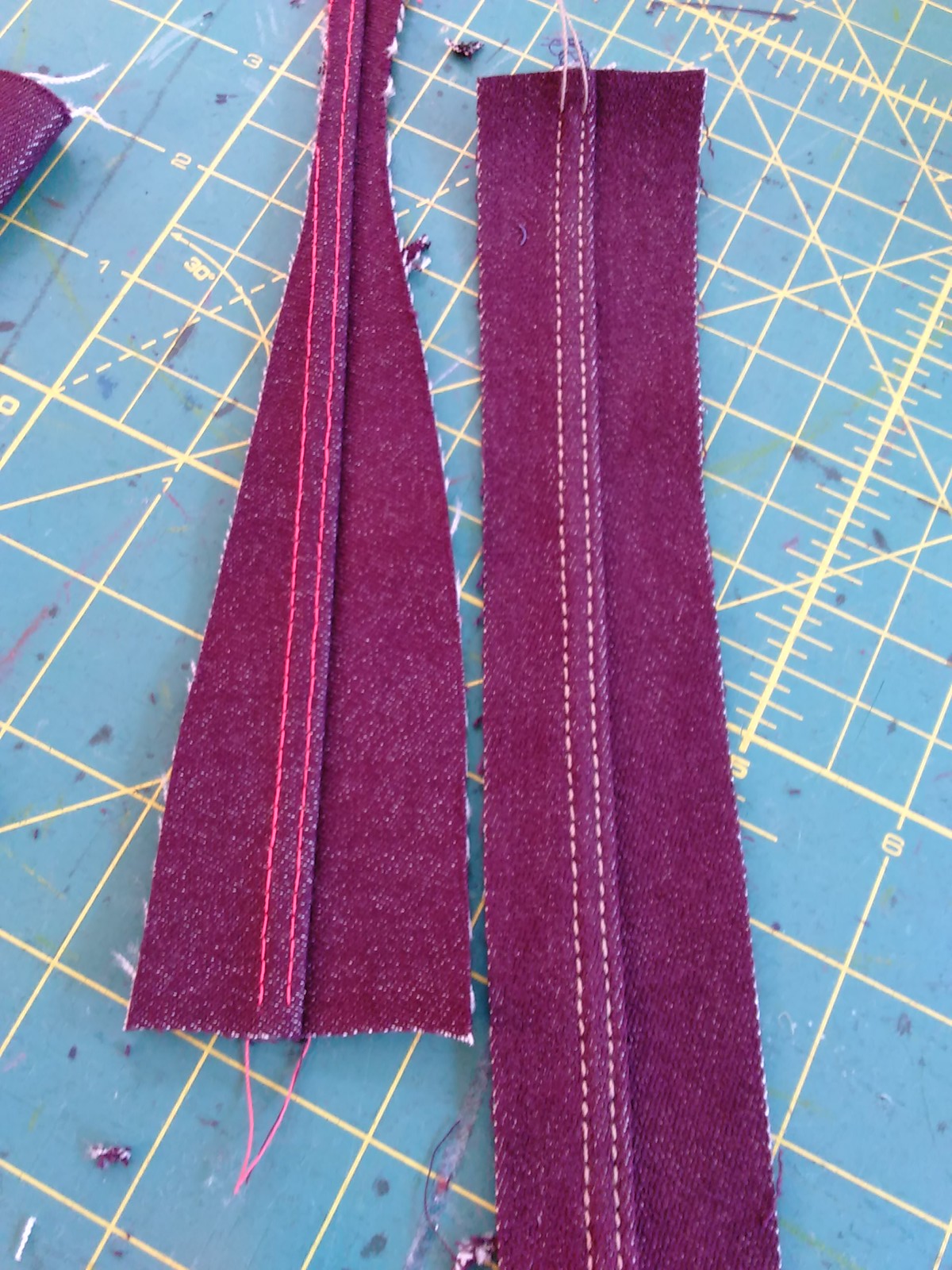 Also I did a lot of samples first too, to make sure I got the length and needle positioning down first.  Mainly when I ripped out topstitching, it was because I didn't "hit" the corner right or the two rows of single needle stitching were obviously out of alignment with each other.