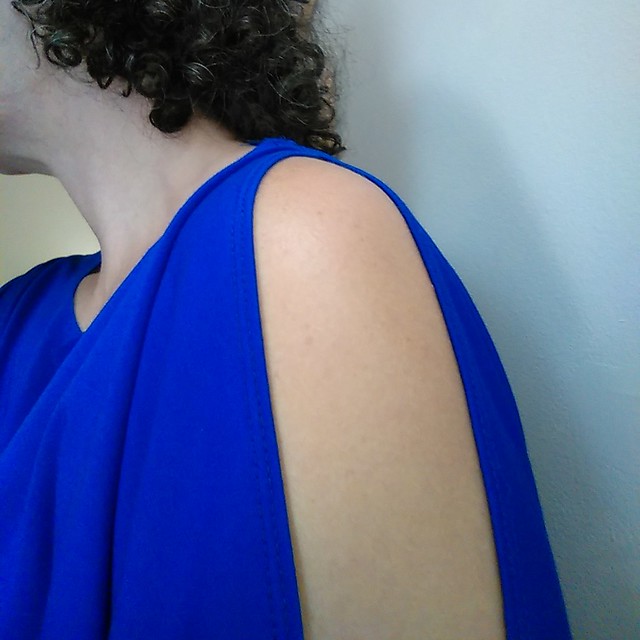 So....the Angela Wolf Delila Cold Shoulder top was not on my list of this summer's #summersewingdreams, but maybe for next year.  (At PR weekend in Austin in 2014, Deepika said that "When we like a pattern, we must buy it right now. We won't sew it for three years, but we have to have it now!" which really resonated with me!)   Recently, Clio made a trendy off-the-shoulder top, in-season at that, and that inspired me to sew up the Delila pronto! 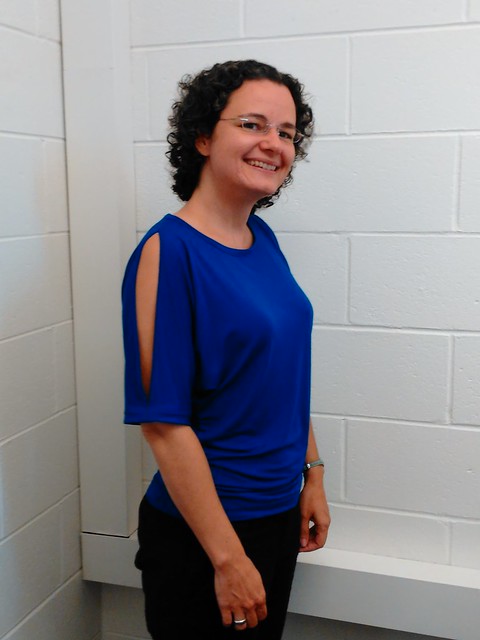 I used some royal blue lightweight ponte in my stash, purchased from Michael Levine's website in 2015.  It takes 2 yards of fabric, regardless of if you make it long or short sleeved.  I bought the pattern off the Pattern Review website earlier this summer.

This is a seriously easy shirt.  Because it is a dolman style top, it doesn't require much fitting. Based on the finished garment measurements in combination with the general body measurement chart, I cut out a small grading to a medium at the waist, and went with view I, which is short sleeved but with the cold shoulder detail. 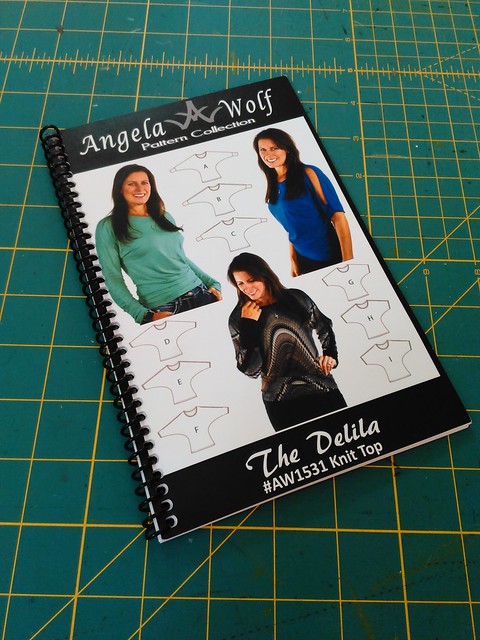 The pattern instructions are a spiral bound notebook, and really detailed.  Angela is very much pro-twin needle (yay! I am too as I don't have a coverstitch machine yet) and the only improvement I would have made to the instructions is to specify that it should be a stretch twin needle. 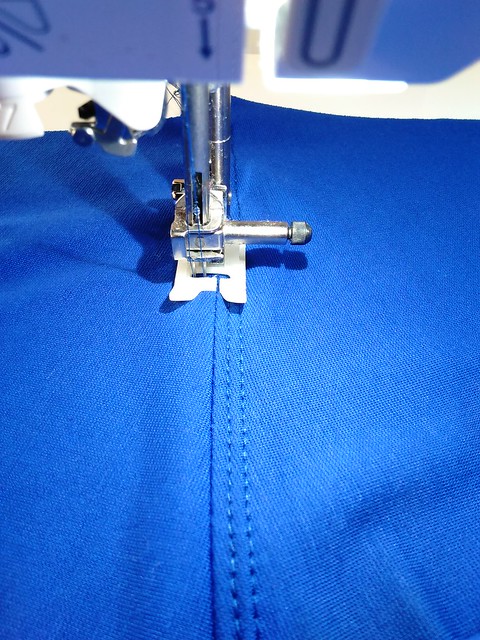 The notches for the cold shoulder opening actually ended after the short sleeved line, so I went with the instructions which said to start the slit about 2" after the neckline and end it about 2" before the hem. 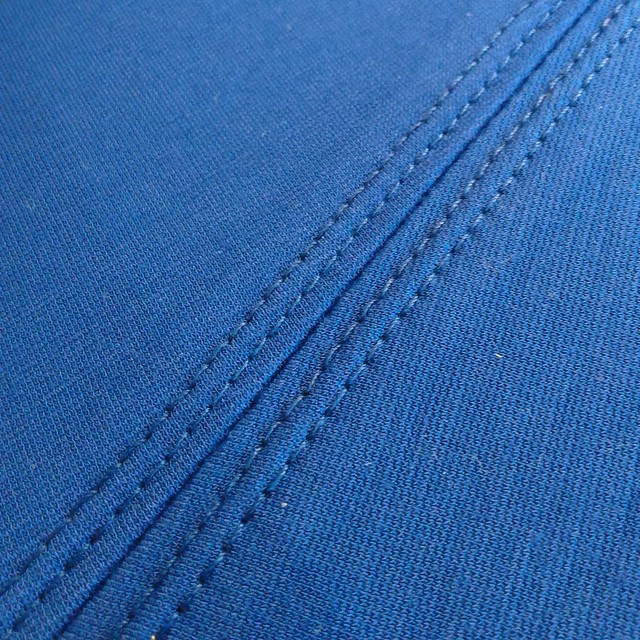 I bound the neckline in a different way (used a strip of 1.75" wide fabric, which was serged on one long edge.  Sewed the band on to the neckline with .5" SA, RS together, raw edges together.  Then I wrapped the band to the WS and wonder clipped into place, then topstitched the band down. 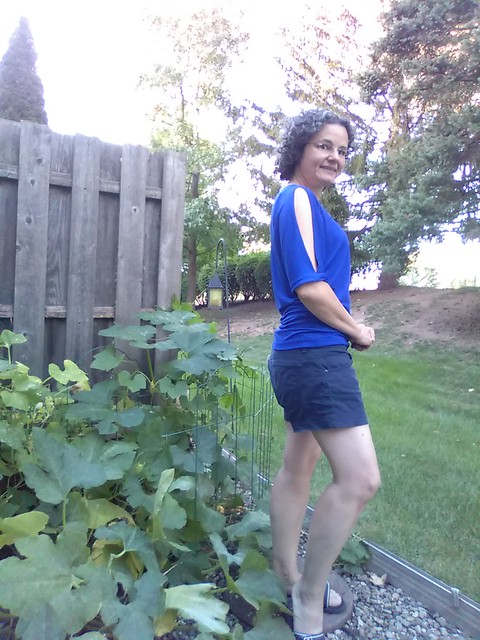 I made the hem 1" instead of .5" on the sleeves and the shirt (because it is easier for me to press a knit up by an inch instead of a half inch) . 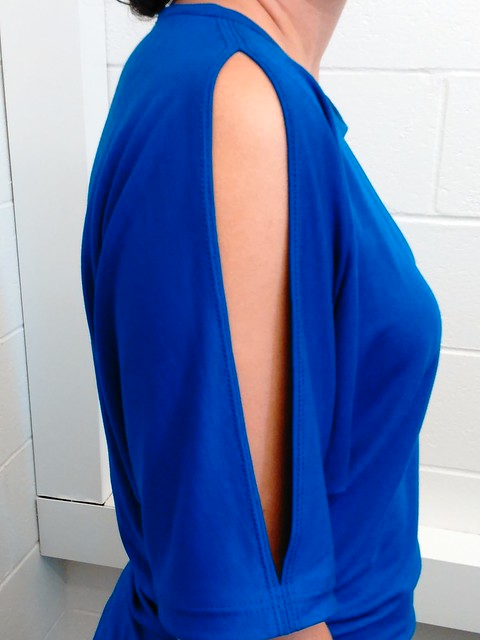 I pressed throughout with my Elna Press and my clapper (which happens to be the Angela Wolf clapper, felt like it all came full circle!) 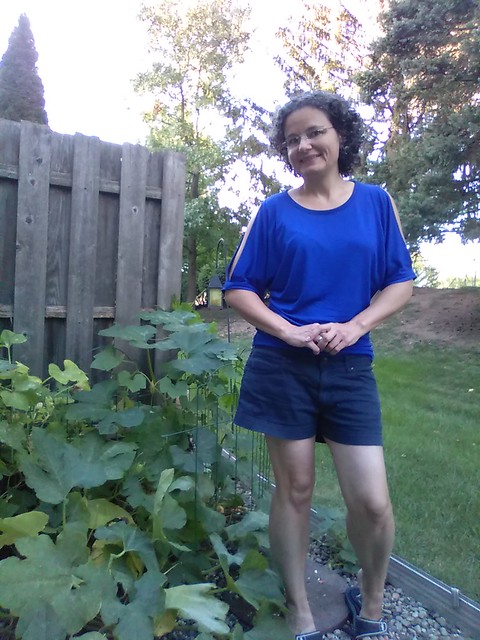 Next time I think I would shorten the sleeves by an inch or so, so that they end before my elbow.  As it is now, they end right in the crook of my elbow and get wrinkled there.

I have worn it twice now and it is a fun and cool shirt to wear, and totally different from the other shirts in my wardrobe.

Thanks for the inspiration, Clio! 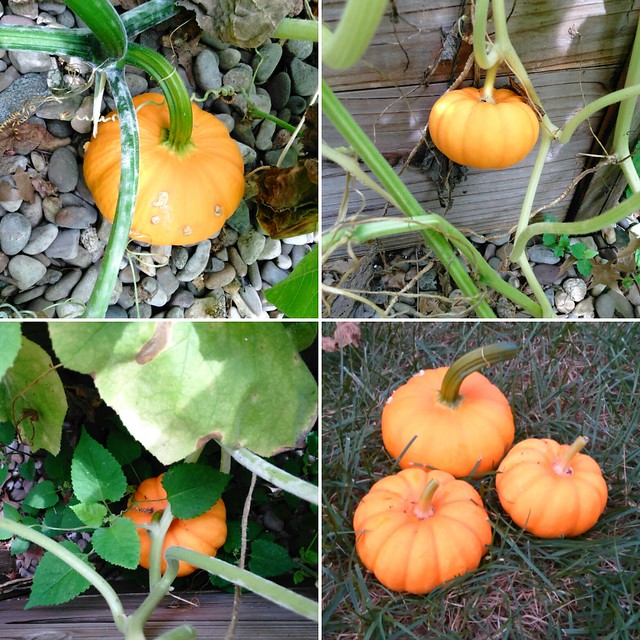 My first pumpkinette harvest of the season!  Woot!  There are a bunch more growing on the vine right now but I am always weary that something is going to eat them....hopeful for a second crop this year!