I don't know how to hold a gun 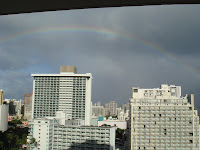 Rainbow morning! Monday, November 17, 2008 in Waikiki
Today was our "day off". No tours. No wake up times (though the condo phone rang at 12:45 and 12:47am for whatever reason...) Read the newspaper. Love the fact that the Honolulu Advertiser (and not the USA Today) is delivered to the door daily. There were some really great articles in there today about recycling styrofoam; "green" cleaning products with home recipes; and an article about "alternative" crafters. Plus their daily comics are in color! And we've been introduced to a new comic called "Retail" which wasn't very funny today but was a hoot on Friday and Saturday. And there was a rainbow today that kept appearing and disappearing!

We did some shopping today and I did more Giftmas shopping. Almost done... We wanted to go to the beach but it started raining. It's been raining on and off since we got here--which is in contrast to our previous stays on Oahu (we recall it only rained the first night we were in Waikiki in 2004). Early Friday morning was the worst rain--we got stuck in it on the way back from the grocery store (the bill was $85 for the basics! Everything here is twice as expensive compared to the Stop and Shop at home. $7 for a box of Special K, $4 for a quart of milk, $7 for the mid-size carton of orange juice...but from what I've read, it's so expensive because almost everything is shipped here from the mainland. Hotels don't make much money off of the food they sell. It may seem like a rip off, but it really is that expensive). Anyway, yes, it's been raining on and off so no beach this afternoon!

Tonight we went to a place called King's Court. We can see it from our balcony and it looks a bit Disney-fied but one thing they do have that is neat is the King's Guard ceremony, which features lots of cermonial gun activity (flipping, stomping, throwing, tapping). Afterward they let the tourists pose for free photo ops. I have no idea how to hold a gun so I went for symmetry, but later on I saw a couple who posed with the gun the "right" way. Sigh. 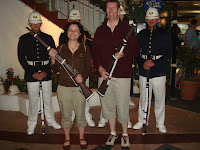 I have no idea what I'm doing
Pete hasn't been feeling very well with headaches each day. He's not sleeping much at night. I've been sleeping pretty well and feel good except I'm occasionally tired. We've kept the sliding glass doors open all day and all night, but maybe tonight we'll try closing them. (It's a really nice temperature--not too hot and only sometimes a little cooler.) Tomorrow we're going on a one day tour of Kauai. So many have said that Kauai is the best island, so we're going on a tour to check it out. The tour co. will be here at 5:50am for the pickup, with a return to the hotel at 7:30 or 8pm. It will be a long day but I think it will be worth it. Then Wed. is another "free day" and Thurs we fly to Maui for a week!

Tonight's ambient noise includes: people laughing and some live Hawaiian music.
Posted by Kyle at 12:29 AM