It's the only cemetary with a gift shop 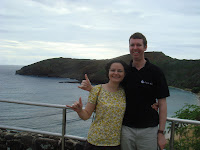 Hanauma Bay, November 16, 2008
Aloha! Today we took the "Grand Circle Island Tour" of O'ahu with our Roberts Hawaii Tour Guide Duke. After a 6:30am wake up time and a 7:50am pickup, we were on our way to many sites such as Hanauma Bay, the beach where the hot scene in "From Here to Eternity" was filmed, the blowhole (which wasn't "working" today because it wasn't windy enough to produce the waves that force the ocean water into a hole in what I'm guessing is a reef, which gives the impression of a whale spouting water), Pali Lookout (which was waaay less windy than it was when we visited in 2006), the Dole Pineapple plantation, the North Shore, Waimea Bay, a Macadamia Nut hut, and a Japanese temple that was on the site of a cemetary (thus the title of this entry). We were back at our hotel around 4:30 or 5-ish. Then it was on to a Hawaiian/Mexican dinner (enchaladas made with pulled pork--like the kind served at luaus) at La Cucaracha (yes, the Cockroach), which conveniently moved to close to our hotel, just steps away (it seemed funnier when this restaurant was located just below the emergency medical care office on Kuhio--now it's over a surfboard shop). Afterward we saw the bright sunset over Wakiki Beach, then watched the free hula show which featured different performers than the ones on Friday night. Both shows really had a sense of O'hana (Hawaiian for Family) and seemed less commericial and more "real" than the ones we've seen at luaus. We learned this show is sponsored by the Waikiki Improvement Association and is Tues-Sun nights.

I kind of thought tours were lame, but this one was great because I wasn't doing 120 miles of driving; I never would have stopped at a mac nut house on the side of the road (nor known that it existed); we got to hear the life story of our tour guide Duke, which included his take on growing up and living in Hawaii, the cost of living, how much he makes, how many hours he works, how he served in the military and Desert Storm; I never would have seen the beach featured in "From Here to Eternity". Plus Duke was making jokes the whole time and I learned some more Hawaiian words (not that I remember too many of them now). I also learned that Doris Duke's Shangri La estate is up for sale. The Doris Duke Gardens recently closed in NJ and it sounds like her estate is selling off her remaining property. But mostly the tour emphasized that we all need to get out of Waikiki and see the special places O'ahu has to offer!

I took 100 pix today and narrowed 'em down to 79...on my Flickr page...check 'em out! There are pix from the tour, pix of the apt and especially sunset pix! 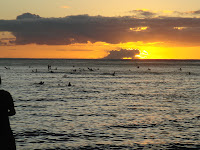 Surfers and Sunset at Waikiki Beach, November 16, 2008
Tonight's ambient noise featured someone singing an especially overwraught-with-emotion Unchained Melody.
Posted by Kyle at 2:10 AM