I give it three years; Pete gives it one week 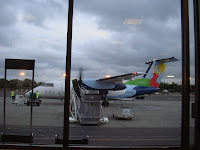 A prop plane similar to the one we flew on Tues Nov 18, 2008
Yesterday we took a one-day tour of Kauai, the Garden Isle. I have been told by more than one person that Kauai is the best of the Hawaiian Islands, and I wanted to see what all the fuss was about!

We were up at 5am for our 5:50am pickup time. We took a small propeller plane on Island Air (an airline I had never heard of...Roberts Hawaii had booked the plane as part of the tour fee). The flight was a bit bumpy. Our tour guide Nani picked us up from the airport. I knew it was going to be a good tour when she said, "for all you men who don't want a lady driver, you can get off the bus the way you came on" or something similar. Plus she said everything twice and spelled out the names of the towns and sites we went to...very thorough. She is a Kauai native and knew all the back roads and fun places and took us to places that were not on the itinerary, such as additional scenic lookout points and an extra waterfall..and we were on a mini-bus so she was able to take us to some tight places. She also wasn't afraid to climb up on rocks or guard rails to take pix of her group. She was extremely knowledgable about Kauai and told us a lot about its history, esp a hurricane that devastated the island in 1992 and left it without electricity for 9 months (imagine, 9 months without electricity). There are still parts of this island that have not been rebuilt, and the ruins of the damaged buildings remain (such as the Coco Palms where Elvis shot one of his Hawaiian movies). She also talked about how dangerous the surf can be. 17 people have drowned off the coast of Kauai since the start of this year. Overall, the island is very lush and green, much more so than the Big Island. In sections where hotels were rebuilt, it is amazingly plush and expensive looking and also very beautiful! 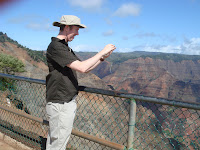 I like taking pix of Pete taking pix
This tour had 22 people compared to the 53 on Sunday's tour) so it felt cozier somehow. Regardless, Nani did leave 2 people behind at our first stop and we had to go back and pick them up when her boss called her cell phone. These two people happened to be sitting in the seats in front of Pete and myself, and someone told Nani "we're missing a few people" but Nani said she had counted, we had the right number, and if there were empty seats, it was because people changed seats. Ha ha ha ha ha. I couldn't remember what the people in front of us looked like and I guess I should have said, "who sat here and then changed their seats?" I didn't think of it at the time. Nani said it was the second time in her many years of driving that she's left someone behind. Oh, and she kept calling the mainland "Big America". Quite a lot. 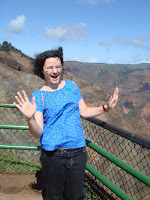 It was windy and I was hamming it up at Waimea Canyon
It was my turn to be sick this time. At one point Nani said, "it's going to be like a roller coaster. If you feel sick, let me know so you can throw up outside the bus." I was ok going up the mountain, but somehow coming back down made me really nauseous. Lots of switchbacks and bumpy portions, plus we were supposed to talk to our neighbors at that point, and I think turning around to talk also added to the nauseous feeling. We wound up talking to the super nice people behind us, who were from New Zeland and whose son is a chemistry professor! I happen to know a NZ chemist from my PDB days, but this wasn't the person. Pete also met a woman from England, who wanted to know where Pete was from. When he said "England" she said, "I know that! Where in England?" Turns out she's English herself but has been in the states since 1953. There was one couple on our tour who was annoying; they were having trouble with some other tour they were trying to book and basically were holding us up or on their cell phone. They are newlyweds and she looks ultra-high maintenance. I give it three years. Pete said he gives it one week.

In total we visited Waimea Canyon (the Grand Canyon of the Pacific), 2 waterfalls, Spouting Horn, and took a river cruise down the Waimea River to the Fern Grotto (a cave with ferns). The river was very smooth so by then I was feeling ok. The tour of the grotto was really neat and I especially liked that one of the performers fed a stray cat Whiskas cat food--she used a curved leaf as a bowl and put the food into it. She said the cat's name is Soprano and she is talkative. The poor cat has an eye infection in one eye but otherwise seemed fine. The performer said she feeds the cat breakfast, lunch, dinner and snacks in between. At the grotto they played the Hawaiian wedding song (apparently they marry a lot of people at this cave). What was neat was they asked who was celebrating an anniversary or honeymoon. For anniversaries, how many years? For honeymooners, how many days? Then they asked who was living in sin. The same performer who fed the cat said that for Christians, it's called living in sin. For Hawaiians, it's the natural thing to do.

Around 5pm we were taken back to the airport. Pete's bag was searched by TSA after a suspicious item was found on the x-ray scanner.. Out came the white gloves and then blue ones on top of that...and into the bag the TSA worker went. We both couldn't think of what it could have been that flagged the search--we had removed all the bottled water. We had both forgotten that a tube of sunscreen was in there. Sigh. The bag and sunscreen had passed security at Honolulu airport that morning.

Got back on the prop plane. The stewardess announced that due to high tradewinds the descents into HNL have been exciting. So once again I felt sick. Then we got on a bus and got stuck in traffic. Once we were back at the hotel I felt better. This morning I felt back to normal, after sleeping like a log and having a work dream.

Today we had another "day off". I fed birds on the porch (love the ones with the red feathers) and we did some more shopping, then spent some time on the beach. We rented chairs and an umbrella which was a fantastic idea. We decided this time to watch the sunset from the roof of our condo/hotel and met a Japanese woman who was travelling on her own and told us a lot about her life (she went to the University of Hawaii) and how excited she was to be here and see the sunset. I felt just as enthusiastic as her. I really enjoy being in Hawaii and am sad to leave Oahu tmw. However, we are flying half an hour to Maui and we'll be there til we leave on Thanksgiving Day. We haven't been to Maui before--I can't wait to see what it's like! 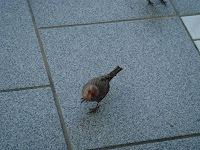 My flicker album has been updated! We may not have internet access in Maui--we'll see!
Posted by Kyle at 2:30 AM