Introducing "Can This Garment Be Saved?" Vol.1 Simplicity 1609 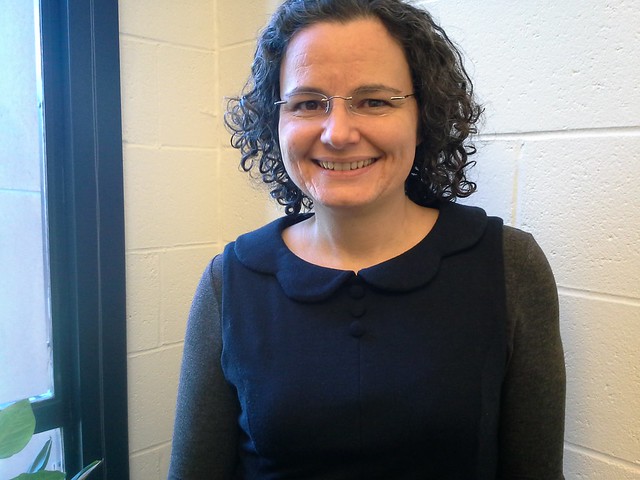 Me in my office, on Friday, wearing S1609 with a gray shirt underneath.

What's going on here?
"Can This Garment Be Saved?" is just a blatent ripoff of the old "Can This Marriage Be Saved" column from Redbook (or was it Ladies Home Journal?) that I would read while waiting for my mother in the dentist office waiting room as a kid.

Why am I doing this?
I have quite a few garments that I have sewn and "completed" but never wear for whatever reason.  Since I put in all that time and effort, I thought it might be fun to start a periodic series (not committing to any specific time frame) featuring those garments and how they were joyously saved, or tragically not saved.

What is the problem?
Well, this: 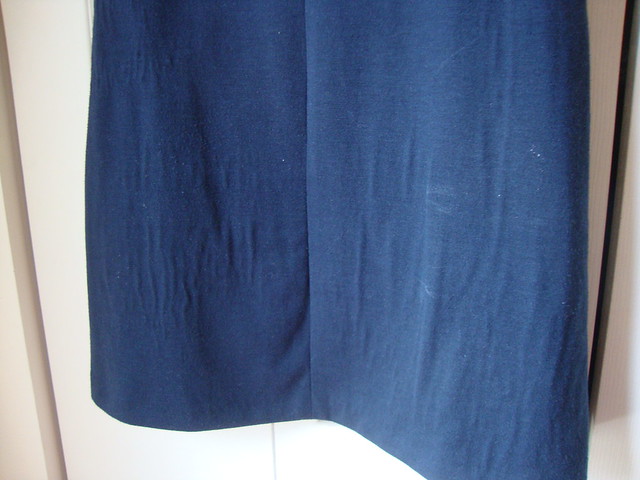 *This* started happening soon after I sewed it.  I bought this knit fabric pre-fused and I'm not sure if it was poorly fused to begin with, or if it was because I made a mistake by prewashing and drying the fabric, or a combination of the two, but it was happening and spreading.  I tried to re-fuse it but without success--pressing again and again (last fall, with my regular iron, pre-Elna Press days) did not make a difference. 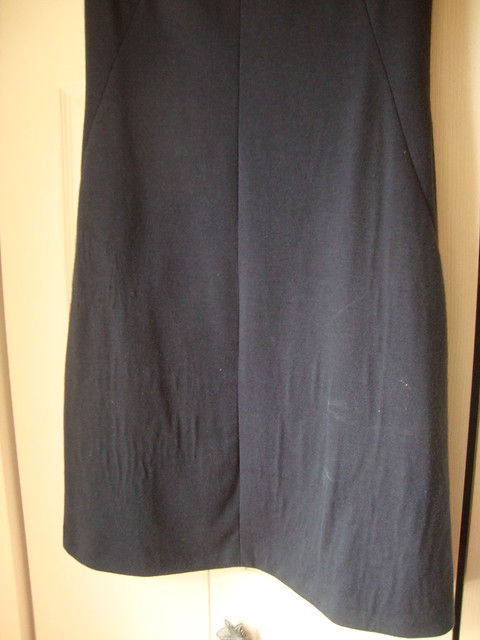 This is another view...

So there it hung in my closet, forelorn and unworn.

So how did I fix it?
Recently I contemplated making it again, which I suppose is the "drastic" solution to fixing it, when the idea struck--why not just peel the fusing off of the entire garment and then cut the fused part out?    I mean, I wasn't wearing it anyway, so if it made it worse it wouldn't matter and if it made it better....it meant I could wear it!!! 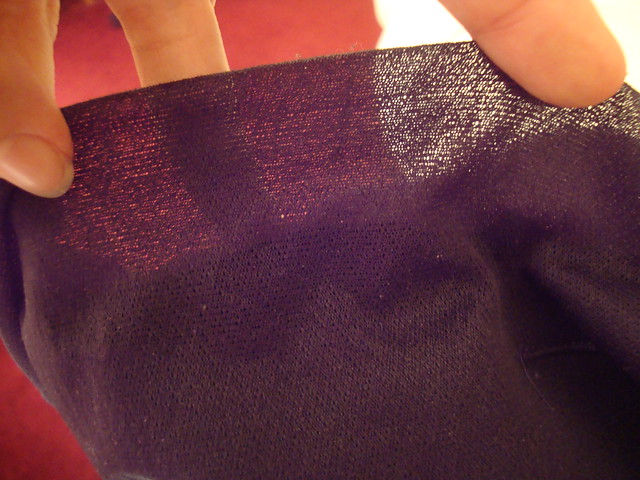 Gently pulling away the interfacing 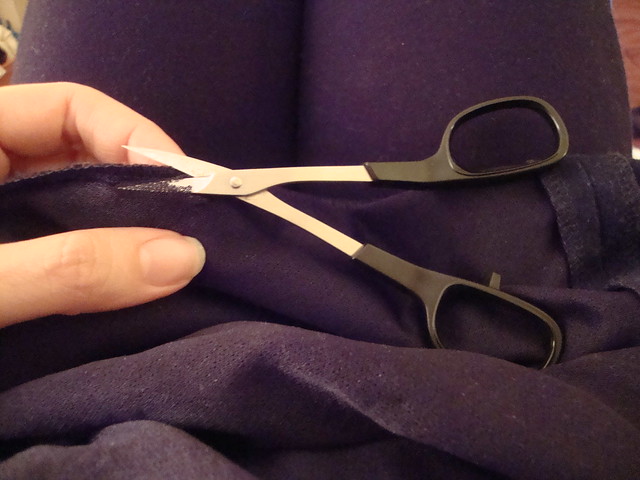 Carefully cut out the interfacing with my bent-handle embroidery scissors

I then pressed it with my Elna Press. BINGO! It worked. 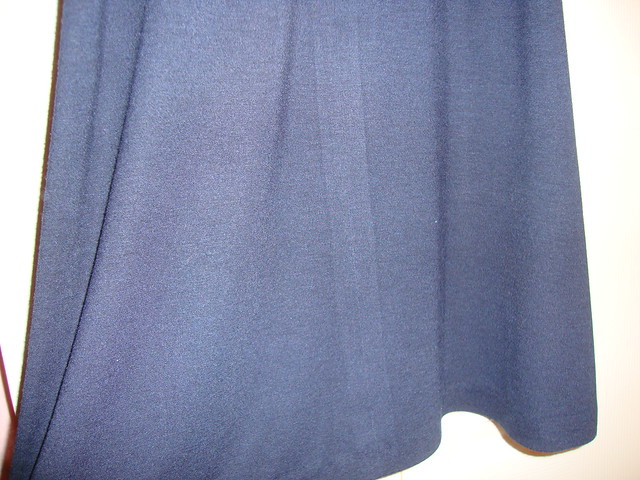 All flat and smooth!

Bonus was the way I constructed this one....I had serged all the cut pieces and then sewn it together with my sewing machine instead of the other way around.   This means that the cut-out parts are totally hidden by the pressed-open seams, so it still looks neat on the inside, core! 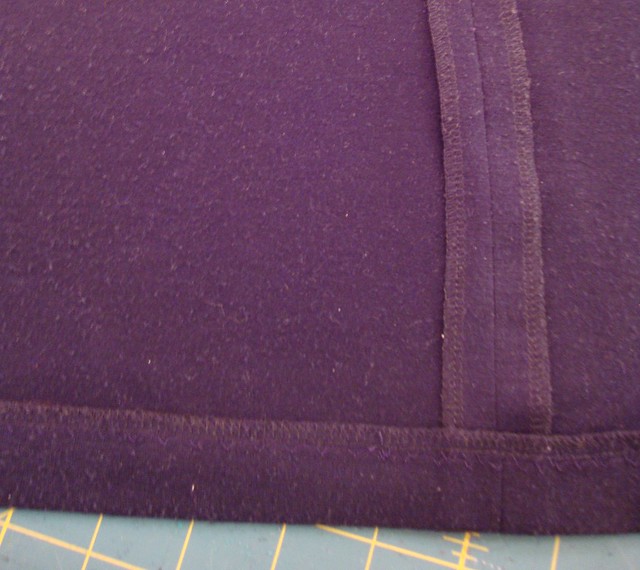 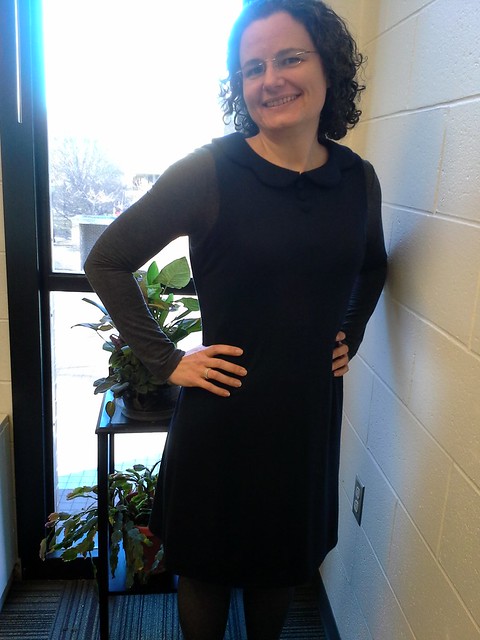 In my office on Friday 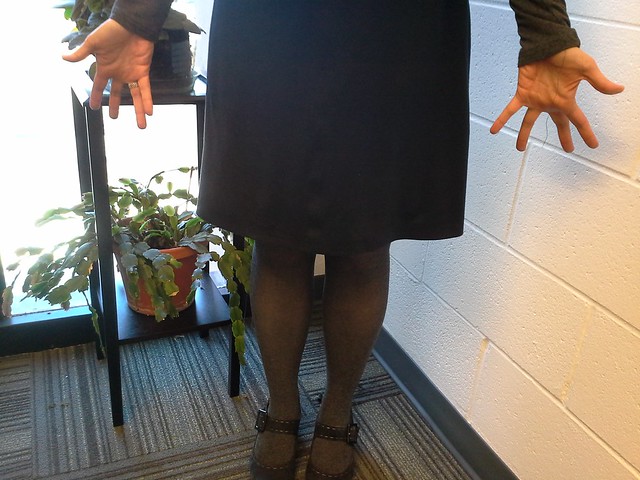 Isn't that better?  (LOL about that huge string hanging off my left hand--that's a RTW shirt underneath).

So what is the final verdict?  Has This Garment Been Saved?
This Garment Has Been Saved...until the interfacing starts peeling away from the collar, but let's hope that's a long time in the future.

Has this got you thinking about garments you can save???

Labels: 1609, Can This Garment Be Saved, dresses, simplicity