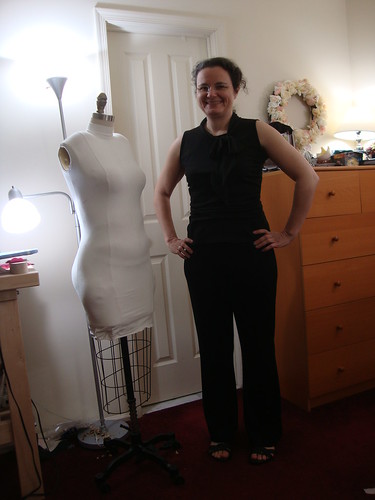 If you are pear or hourglass shaped and hate pants fitting, I think I found the Holy Grail of knit pants patterns. 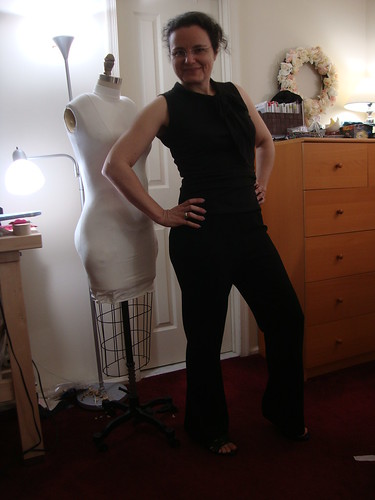 I *love* these pants.


(I know it is hard / impossible to see the details but I will get better pictures for another post, I swear!  I'm just so excited to share this pattern with you!!  Update:  See the pictures in bright sunlight, and a second pair in gray here.) 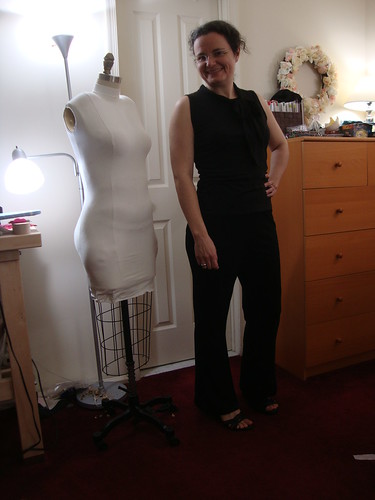 You might be thinking to yourself, but Kyle, they are black pants, what is the big deal? 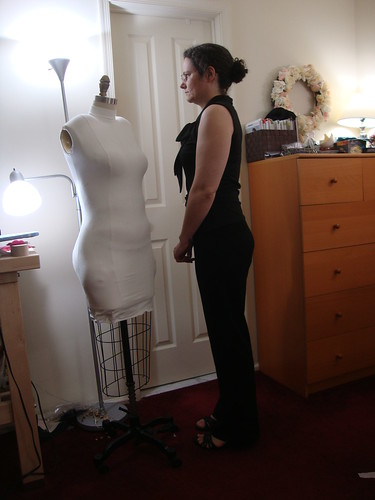 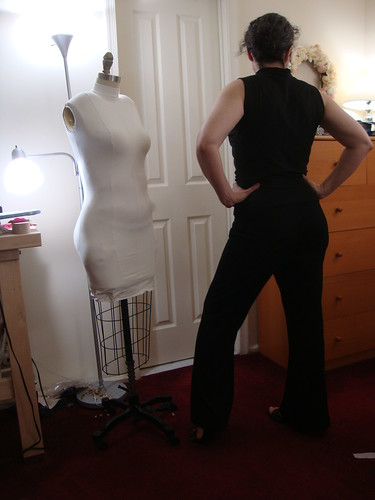 Big deal #2:  I thought I was sacrificing some pretty nice black double knit ponte to make my muslin, but when I basted them together I realized the deal was real.  After a little sampling, I serged 'em up. 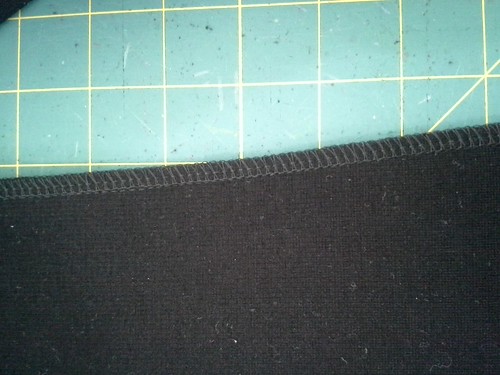 Big deal #4: I *love* the flared leg and how they are not low rise.  I feel elegant.

Big deal #5:  There are some back leg wrinkles but I'm not going to sweat it.  It does not look insane back there.

Overall they fit me amazingly well for sewing them up straight from the envelope (see note about the knee below).     Mimi G is a pear and so am I.  I have a 10" difference between my waist and hips.  I bought the pattern at the ASE and asked Deborah at the Simplicity booth if the pattern really is for pears (I was afraid they might have used the standard sloper) and she said the pants really are for pears. 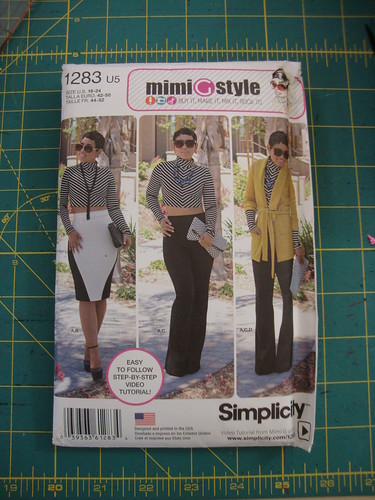 (Note there is negative ease with the pattern, way to go Simplicity for keeping the Mimi G figure hugging style!)

I made sure my fabric had the recommended 25% crosswise stretch.

I am able to get the pants on without the recommended back zipper. 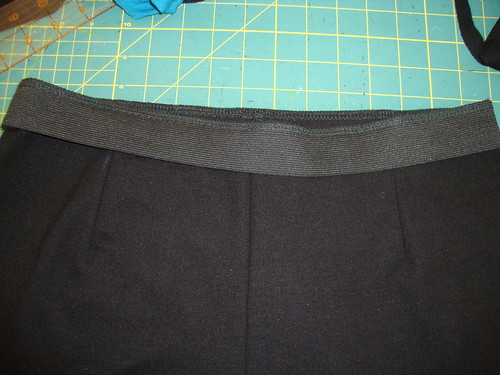 Instead of her waistband I sewed on a band exterior elastic (Pamela's Fantastic Elastic) like I do for my skirts, using the method I detailed here.  Since I won't wear them tucked in, it reduces bulk this way.

I think I probably should have cut the elastic a little shorter as I think they are sinking down a little bit as I walk around my house but I will figure that out for sure during their first day of wear.  I might just steam the elastic in the morning to shrink it down and see if that takes care of it.

I blind hemmed a 1" hem.  And remember I had taken out 5" at my knee, so these pants are loooong. 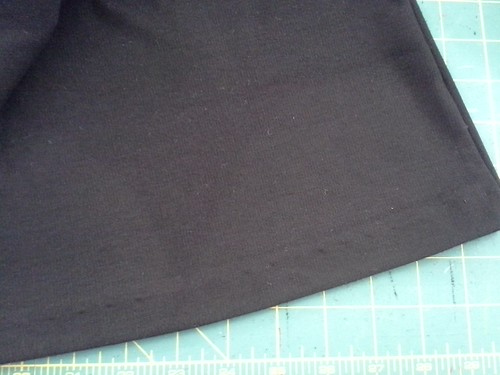 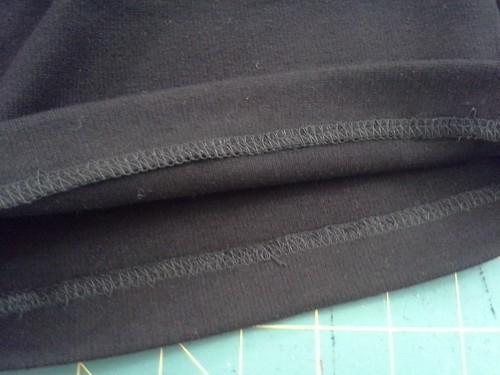 View from the inside

Big deal #6:  I want to make them in many colors!  And maybe add back pockets.

Big deal #7:  This is one outfit for PR Weekend in LA.  I think this will be my ensemble for the Friday shopping day: 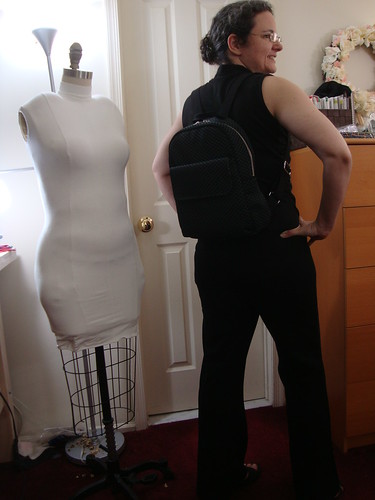 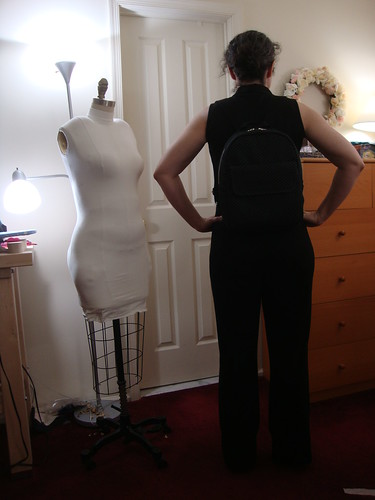 My right hip is a different shape than my left hip--what is up with that??

I did not watch the videos (though I think that is a GREAT idea) but I did read the instructions, which seem to have been possibly written by Mimi G herself.  They were NOT the standard Simplicity instructions; they were more detailed and had better tips and different line drawings.  For example, the drawings themselves were well annotated--when it was time to sew a seam, that particular seam was actually labeled on the drawing.

I can't wait to make the shirt pattern too (I'm going to lengthen it so it's not cropped, and fingers crossed there will be no swayback pooling) and as I said, many many pairs of these pants in many ponte colors!!