Aren't Fridays off work the best? This is the second Friday I've taken off in February. So nice! And since I went to the gym for an 8am class (not doing anything to hurt my back...) it's given me a large amount of time to "do stuff".

I finished my (most likely) lone entry for the Fabric Stash Contest over at SPR.

I've had this Tweety Bird flannel since the summer of 1994! That's when I was seriously into Tweety Bird--it was all the rage that summer. I made a Tweety Bird dress out of some kind of poly/cotton and brought it with me to college. I had planned on making a blanket out of the flannel, but it never, um, materialized.

So now, almost 15 years later, I have made it into Simplicity 3696, a bathrobe with piping. My interested in piping was suddenly piqued by the outfit the members of the Netherlands Olympic team wore in the opening ceremonies. 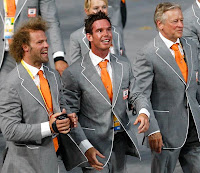 Some people really hated this outfit, but I was in love with it.

I wanted yellow piping for the bathrobe but JoAnn's didn't have any and time was running out since the deadline for the contest is tmw at midnight. So I went with black piping and actually I think it worked out pretty well--it mimics the outline of the Tweety Birds.

I worked on the bathrobe Sunday, Monday and Tuesday night, finishing it up before the Top Chef finale (so sad about Carla not listening to herself--lesson learned!). I used the directions in the pillow section of the Singer Complete Photo Guide to Sewing. The book also showed how to make your own piping--an idea I hadn't even considered, but I didn't have any cording to make my own and I wasn't about to go traipsing back over to JoAnn's to get some to make my own.
I wound up adding piping not only to the front facing, but I also chopped 4 inches off the sleeves (the pattern called for 3 inch hem?), attached the piping to the sleeve ends, folded the chopped bits in half, and sewed the sleeve cuff on.

Closeup of the piping.
You can also see my short haircut.

Back of the bathrobe.
This afternoon, I might make a shirt that I already cut out. Or I might make a wreath out of these fake forsythias I picked up at Michael's. Can you tell, I'm ready for spring??? 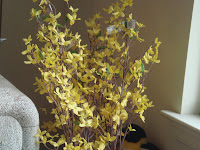