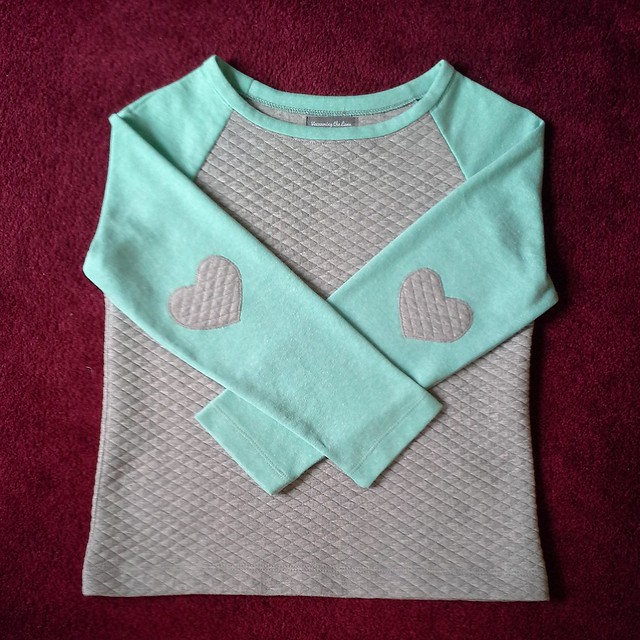 Soooooo....back over holiday break I made the heart sweatshirt....and since then I've made two more sweatshirts and a pair of sweatpants.  Mainelydad, who tracks all the Milan runway trends for me, says this is officially called Atheleisure.  Ok, let's strut the runway!! 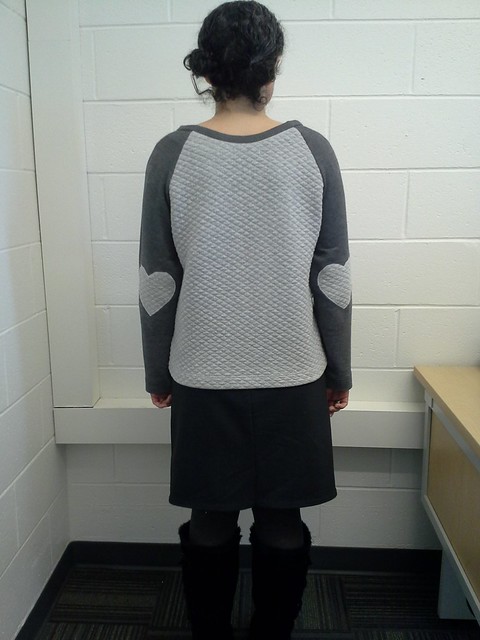 Ok, so I did not wear this to work. This was just for the photos! 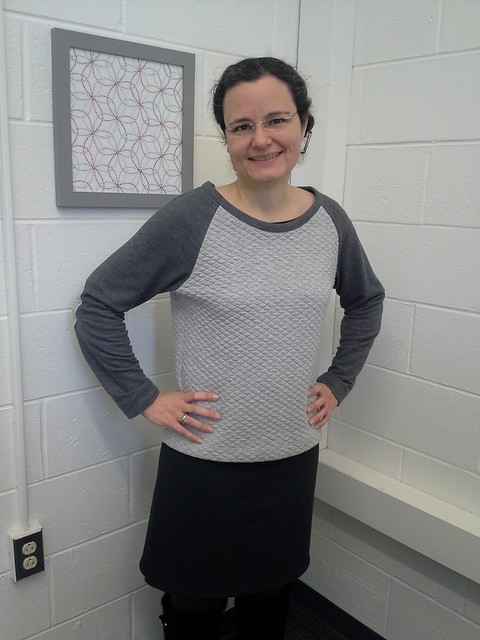 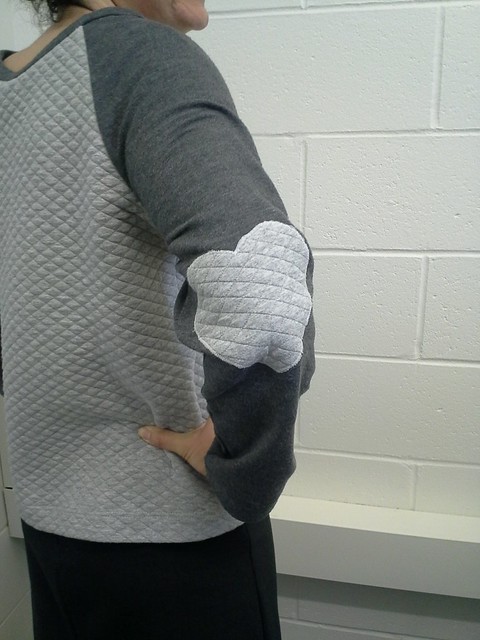 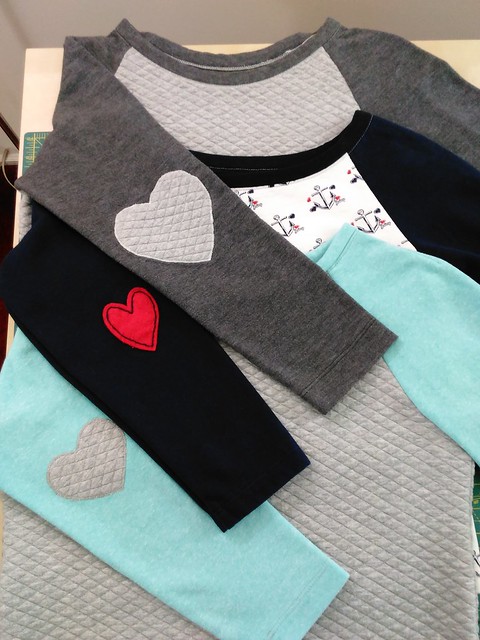 Note: I was planning on using the pre-quilted stretch sweatshirt fabric for a dress but then decided I would look too much like a roll of quilted paper towels and went this route. 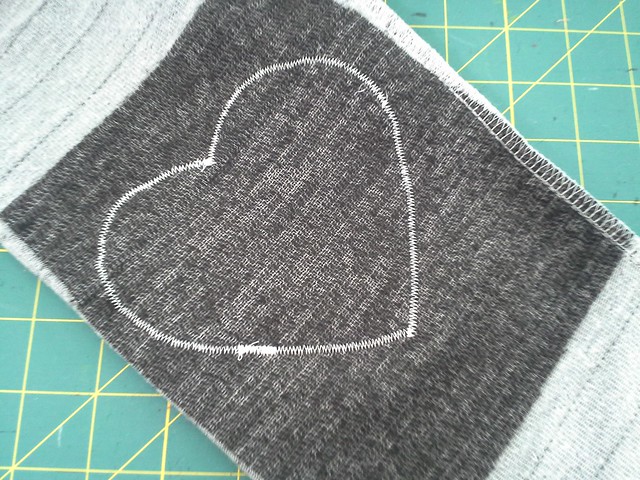 Elbow Patches
I used McCall's 6992 for all three sweatshirts, and added heart elbow patches to each one.  Like the three little bears, I think the first elbow patch I sewed on (the red one) is too small, the second one (the gray on gray) is too big and the third one is juuuuust the right size. 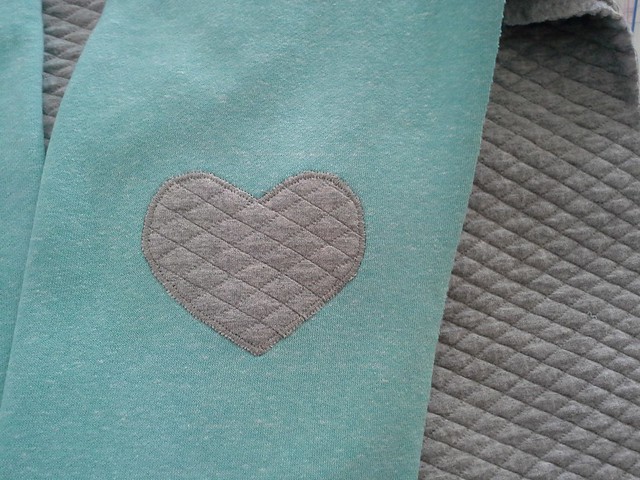 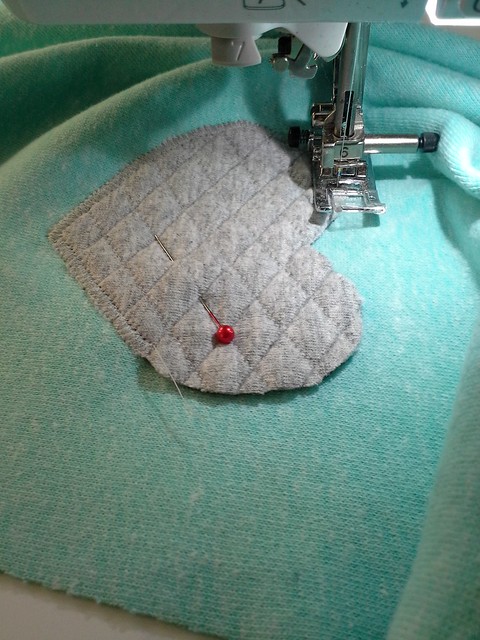 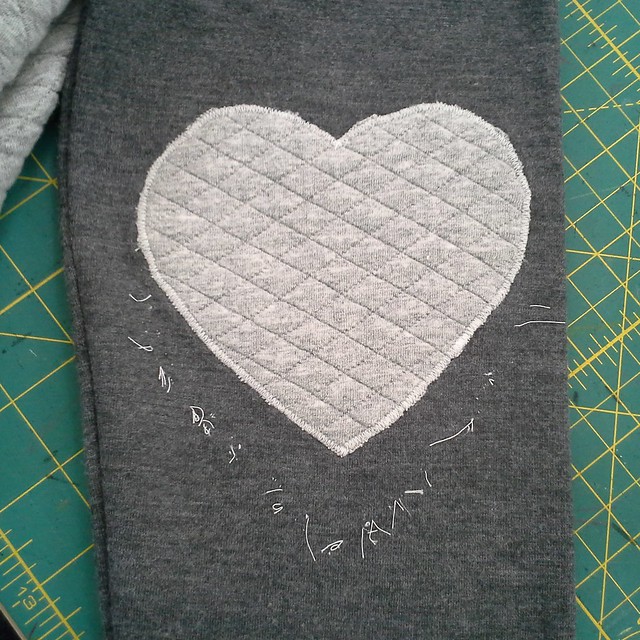 It was too low....the threads mark the former location.... 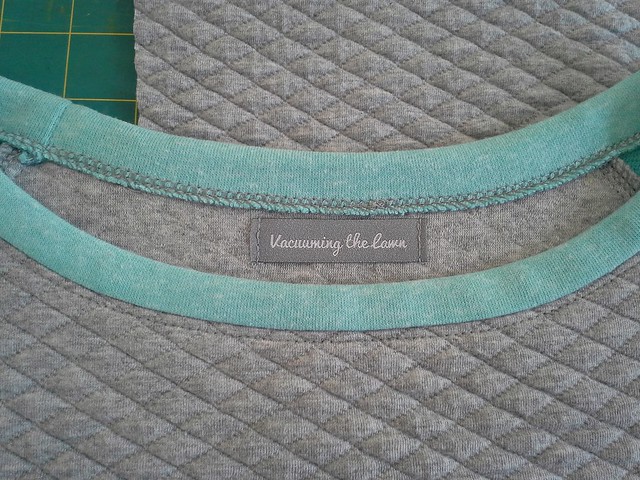 Binding the neckline
I bound the neckline by cutting a long strip of the contrasting knit crosswise, serge the long raw edges, stitch it down RS to RS while stretching the binding, then turn the binding to the wrong side, and stitch near, but not in, the ditch.  If I had sewn it the way the pattern instructs, the neckline would be higher overall. 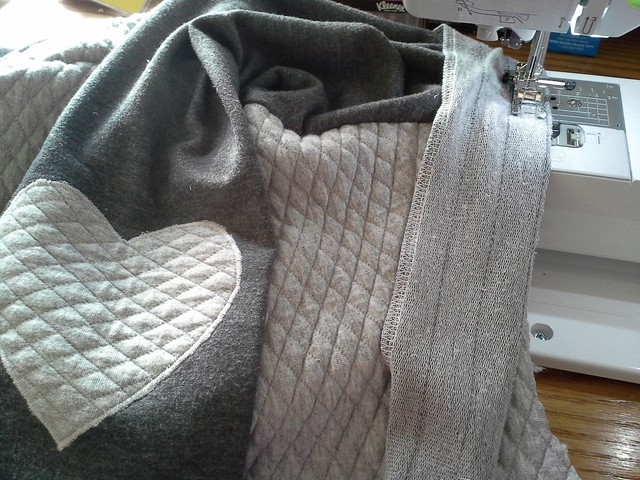 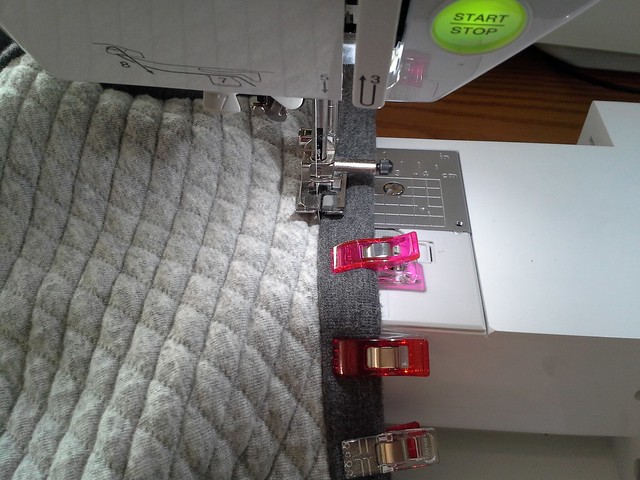 Stiching near but not in the ditch, using my blind hem foot as a guide. 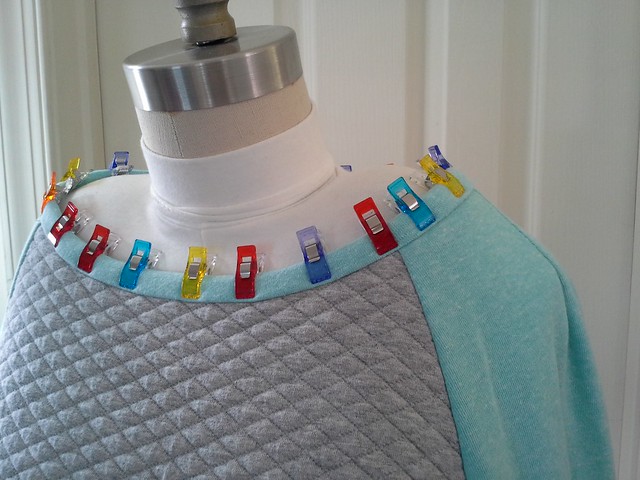 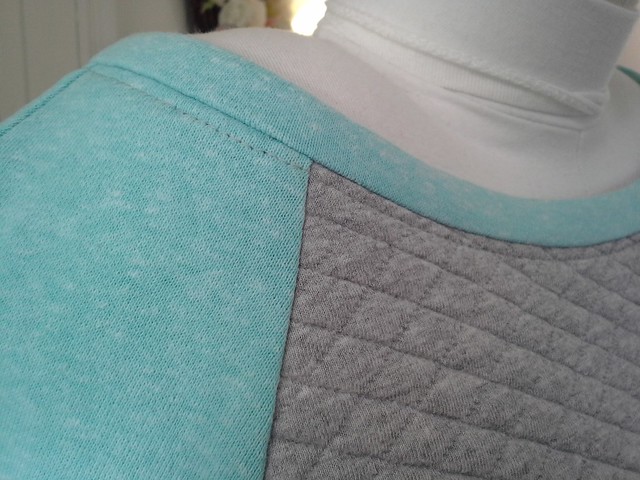 Hems
The raw edges were serged and then I twin needle stitched on my machine. 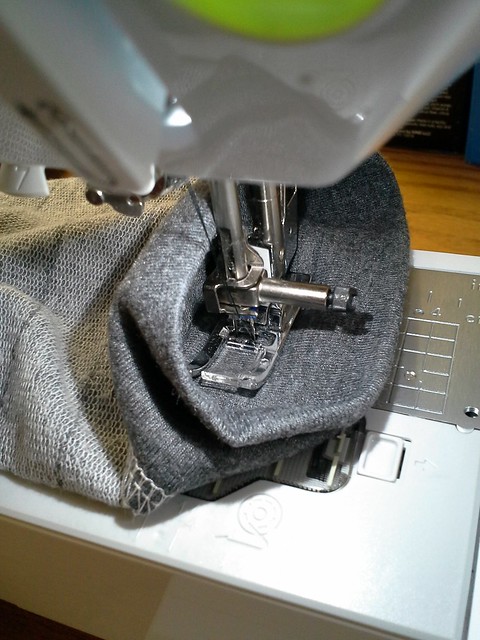 Difficult to do on the sleeve hem... 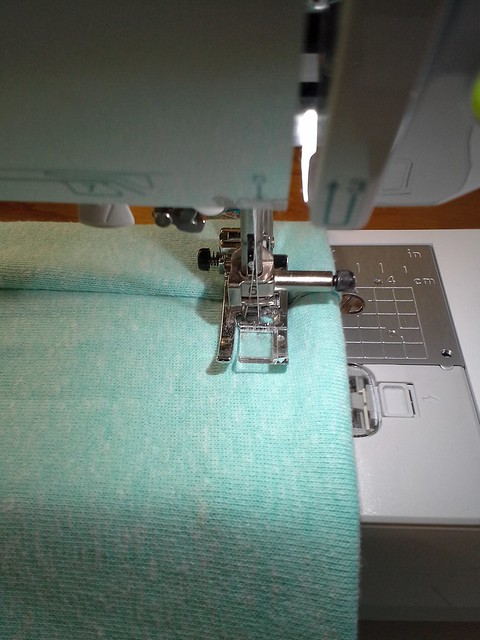 ...but easier to sew on the pants.
Interior edges
I basted first on my sewing machine and then serged on my serger.  By the third version I suppose I could have just gone for it and serged it all on serger but I wasn't confident enough. 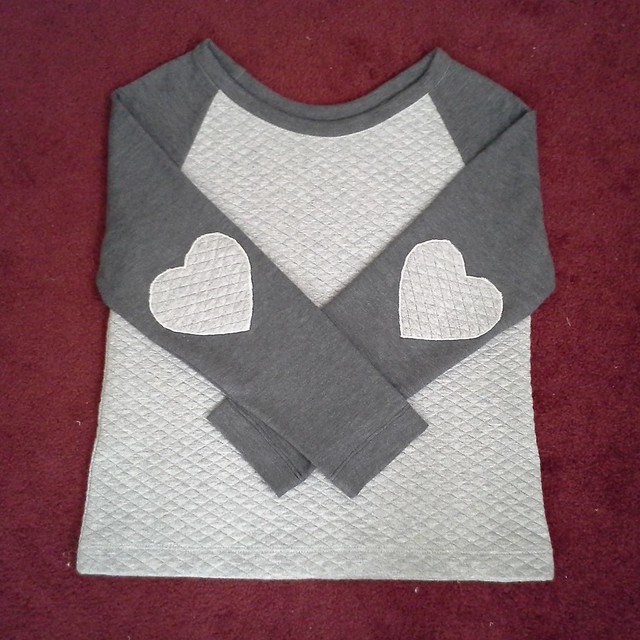 Bonus!
But wait, there's more...I also made sweatpants and added a pocket for my phone.  I meant for the placement to be like cargo pants pockets. The pocket wound up being too high, but conveniently located. 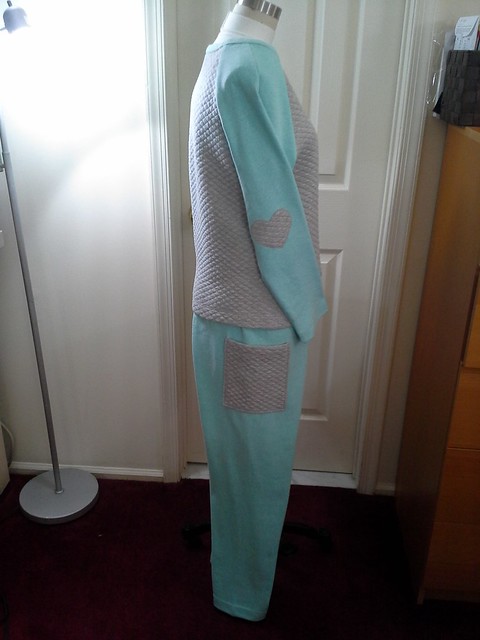 Is this photo kind of creepy?  I'm never ever owning a full body dressform, ever. 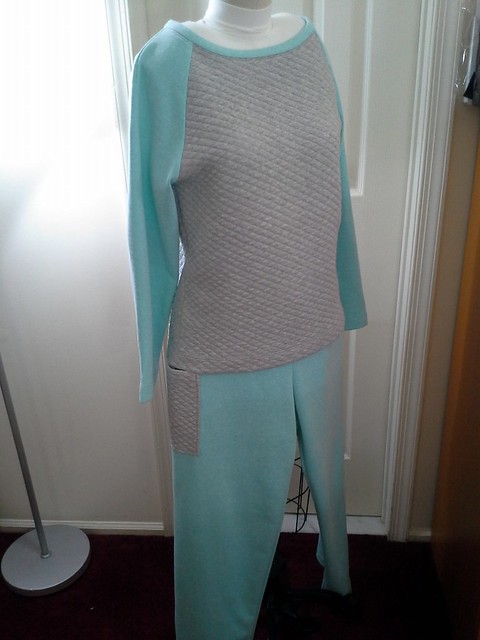 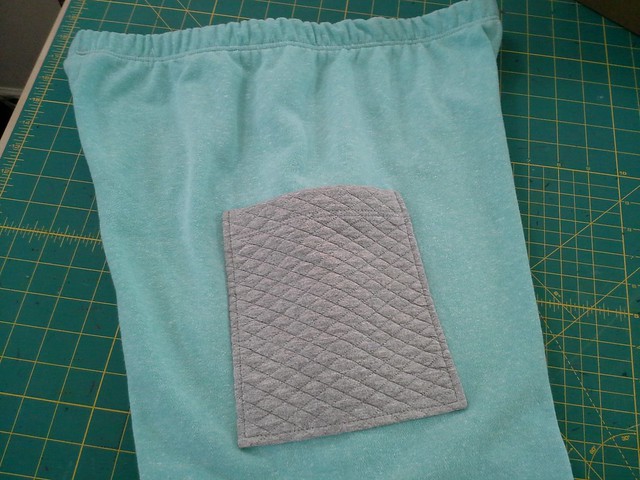 I used Pamela's Fantastic Elastic and her method for sewing the elastic to the pants, but I divide the pants and elastic into eighths instead of quarters. 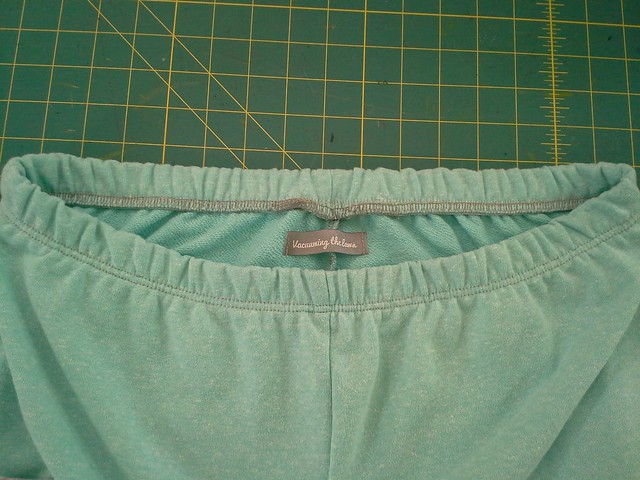 Overall Verdict
I like version 1.0, but the sleeves are non-stretch fabric, so not as comfy as they could be.
Version 2.0 is pretty awesome, because I love how the back of the quilted fabric feels--it is fantastic!
But I love love love version 3.0 because of the color combo and how both of the fabrics feel--super soft..