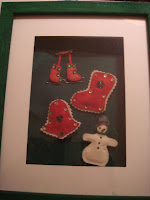 Some of my favorite pins that my grandmother made

Work
First, my work project finally came to fruition this weekend. I have been working on the software upgrade since Jan 8, 2007, testing, testing, testing, and in a way, it felt like maybe release day would never come. I'd find bugs, they would be fixed, breaking something else in the process, etc etc etc. (During the 2007 user conference in New Orleans, I had my tarot cards read. I asked her how the upgrade would go. She said it would take longer than I thought, but it would work out.) Finally we got to a point where the software could be released. We shut down the old version Friday night at 6pm and the upgrade was done by 8:30pm. That night I had a nightmare combining the upgrade at my current job with the office at my old job. Finally I awoke and tested the upgrade yesterday for ~5 hours. Tomorrow, the user community starts using the new version. I've trained ~60 users so far the past two weeks, and have ~20 more to train. I've updated or written many, many pieces of documentation with a few more to go.

I wonder what will happen tomorrow; how will it go? What problems exist that I didn't find? For now, it is an amazing (and exhausting) feeling that it is finally released.

Hawaii flashback: On the Oahu Grand Circle Island tour, we met two people who tour the country installing Oracle. One of the was kind of surprised that I knew what it was!

Broken tools
In other news, I accidentally broke my grandmother's knitting needle. I use her needles for turning "ties" inside out. I've never had this happen to me before! Argh! While I was using her needles I was thinking about how she was a creative person and how I most likely got my creativity from her. A few years ago I organized some of her holiday pins into this shadowbox. I made my own snowman pin but discovered I don't have the patience for sewing little things like that. I prefer garments and larger craft items (though I do cross-stitch). And then while I was turning a tie inside out, the needle broke, in many pieces. 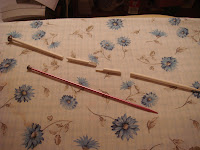 The broken plastic needle and a smaller metal one
Tonight I made "English Toffee Bars," which are a cookie that my mom's neighbor makes each year (though I don't really know what is "English" or "Toffee" about them. It's basically a cookie dough made with oats, with chocolate & walnuts on top.) She gave me the recipe last year. After mixing with my mixer, lifted up the plastic bowl to put the contents into the pan and discovered the bottom of the bowl cracked open with a huge hole. What a surprise! 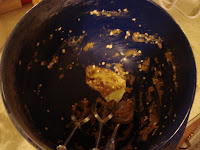 The bowl that cracked up...
I'm not sure if the cookies are good or not...they are hard to get out of the pan (I guess I didn't grease it well enough) and now I've scratched the non-stick cooking pan. Sigh...

I did sew a shirt today but I'll write about it...tmw??

It feels like the holidays should start now, but I have three more days of work to go!
Posted by Kyle at 9:45 PM