That Viking 6570 is smoking, and not in a good way

ETA:  Here's a pic of the sewing machine that smoked, courtesy of Michele's husband Wolfgang: 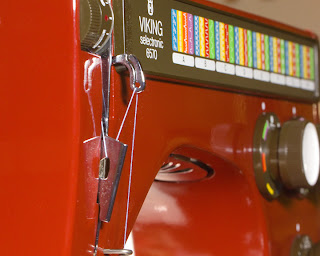 Good morning from La Jolla! I had a lovely day yesterday with my friend Michele. I don't think I've seen her since 2005, so it was a real treat! After meeting for lunch we spent the afternoon at the San Diego Zoo.

She told me to say "zebra" instead of cheese. :)

and here she is saying Zebra!

We carried umbrellas as it was raining in the morning...it insured it would not rain in the afternoon. Such a pleasant afternoon too. The last time I was at the SDZ was a hot sunny day in 2004. The cooler weather and overcast skies made the zoo so much nicer!

After the zoo we went back to Michele's house where she cooked me dinner. She is a gourmet chef and made a scrumptious dinner of her own handmade pasta and meat ragu sauce, with a salad of goat cheese mozzarella, tomatoes and basil from her own garden.  This meal was at my request--I remembered her cooking it the last time I was there and loving it.
Delicious!
And for dessert, homemade brownies with crystallized violets.  YUM!    I felt so lucky to see her again and spend some time just chatting and catching up.

Michele has a red (yes, red!  Such a pretty machine!) Viking 6570 sewing machine purchased on ebay. She calls it Scarlett.  She sewed on it a little while and had it serviced last year but had not used it since the servicing.  I had heard others write about sewing machine cams before, but had never seen one in person.   I learned a lot:


So I was able to :
It was solidly stitching and seemed like it could be a workhorse sewing machine.

It had a switch on the right side for the needle up/down function.  There was nothing in the manual about it, and later realized the manual was not for her model of sewing machine.  I thought it might mean inserting the needle in the fabric for you and raising it up when you're done, but it didn't seem to do anything (later I learned it's to determine what position the needle should be in when you stop sewing--I had noticed the needle was always up when I stopped sewing, but didn't know that was the reason why).

So then I asked Michele if she wanted to try it herself, while I was there, to make sure she could do all those things too.

As she was reaching for the wheel on the right side of the machine, the machine suddenly goes "pop pop" and starts SMOKING.  What a foul smell too!  I unplugged the machine and carried it outside where we stared at it wondering what just happened!

Then we googled and found this thread which says her 6570 smokes when she uses the needle up/down function but not when she "turns the feature off".    I think I switched the switch downward.  It must have been in the up position while I was doing my tests.  I guess turning the feature off means setting it to neutral, I don't know because the manual is not for her model of machine.    I had no idea that something like that would happen!

I just found this thread on the PR website about the 6570 smoking after 5-10 minutes of use...

This post has lots of pix of the 6570 including the needle up/down switch on the side in the 5th picture.  You can see the up/N/down, where N is neutral, I guess.  I think I had left the switch in the down position.  UGH!

Also found some posts on line about smoking meaning the capacitor has burned out.

Anyway, if you have ideas, let me know in the comments.  Has your sewing machine ever started smoking??

I'm sorry I broke your machine, Michele!    I've sewn for 25 years and nothing like that has ever happened to me before.

Now I'm off soon to meet Elizabeth from SEWN for some fabric shopping!