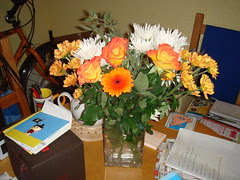 Flowers from Pete!
Hey hey! I'm in England now for a week of vacay! The flight was fine; I had three seats to myself so I could actually sleep for a bit. The inflight entertainment system wasn't working, and the attendants kept rebooting it over and over again. It was all linux! After the 5th reboot I was thinking, nope, you can't fix this...but they kept rebooting. Finally at one point the flight attendant finally announced that it's not going to work, that he was going to turn out the lights and we should all go "nighty night". It didn't bother me because I never really watch the films and I did sleep for about 3 hours.

We're planning on going to a craft fair tomorrow, then early in the week we'll go to the British Lawnmower Museum and also to the Model Railway Village. I'm actually really excited about going to both of those attractions, and am hoping for exciting Lawnmower postcards! We're also going to Silcock's Funland, which initally appears to be like Point Pleasant Beach.