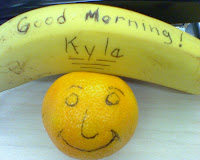 I eat a good amount of fruit. I tend to bring in a good chunk of it at the start of the week, and leave it on my desk at work so it's readily available when I want to eat it. So this morning I came in and found 2 pieces of my fruit, vandalized as shown above, by one of my coworkers. Hmmm.

Yesterday I was feeling pretty good and coherent, but now my cold has reinvigorated itself. I just want to stop the mucus factory that is my nose and lungs. I think I would have gone home after lunch, but I wanted to keep my appointment with Len.

Len fixed my left knee again. He pressed on the back of my knee which he has not done for quite some time. It is very painful when he does that, but it seems like it's good as new now.

He thinks my right ankle is just strained tendons and ligaments and we should see if it happens again.

He spent a lot of time on my jaw (have I mentioned, my latest problem? That my lower right jaw hurts sometimes while chewing food--it started while I was eating almonds earlier in the week?) He said, "does it hurt here, or here?" and my goodness, the second "here" was definitely the spot. He spent a long time on that, pressing into my oily face where the jaw hinges. I see my dentist on Tuesday so we'll see what he thinks, is it the wisdom tooth or the jaw itself. Len thinks it's probably a muscular issue there but my dentist would know if it's a tooth issue.

Which leads me to, what is causing all of these problems? My coworker suggested getting a lyme disease test--that would be for joints. Some of my problems are joints, others are muscular.

So for Christmas, I'm going to get myself a physical and a blood test to find out if I have lymes, or if I'm deficient in something, or overdosed in something else. I want a good primary care doctor, no, a great one, and I want to be heard (basically, I wish my acupuncturist was a primary care physician). I've taken recommendations from coworkers and my acupuncturists, so I'll choose one and give myself the gift of a physical.

That and real boots and real grippy things for my boots. Because I am NOT falling again this winter on ice.

*p.s. my back is holding up pretty well all things considered, and I feel like it's more "loose" and "free" than it has been in a long time, and that maybe the back pain will be completely gone by Christmas. I told Len this, and he said "shhhhhh" as if to say "don't say it out loud and jinx yourself."

Ok! So for this weekend, lots of rest, some laundry, some chores, some finances, some doctor decisions, and maybe sew up a simple shirt I cut out like 3 weeks ago. And maybe SPR Pete's lemon pjs.