We went back to the Waterview and Riverview today. Still deciding among the three available rooms.

We also visited the gazebo again. Took a ton of pix which are in the Wedding Ideas album on flickr (at the end). 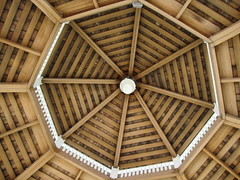 Looking up into the gazebo 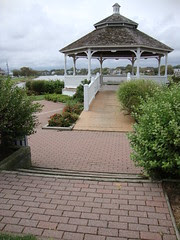 Front of the gazebo 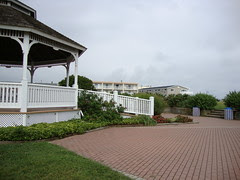 Plenty of space for setting up chairs--on each side (this is just one side...) 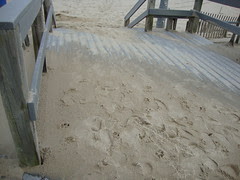 So much sand on the boardwalk after yesterday's storm!!


We happened to see some folks setting up chairs on the beach for a beach wedding. I asked one of the helpers but it turned out to be the best man--he said family members were setting up the chairs. I asked where he rented the chairs from but he said he didn't know. Those pix are on Pete's camera. We also saw the bride arrive for a different ceremony over at the Belmar Fishing Club. It looked like maybe the ceremonies were going to be at the same time, practically right next to each other!

I think next week we are going to set the date, even though we don't have the visa. It's looking pretty likely to happen May 2010. Trying to align venue, gazebo, Hawaiian guitarist, and DJ. Trying to avoid Mother's Day and Memorial Day weekend. Trying to avoid Sewing Pattern Review weekend as well!! (or maybe we'll just honeymoon at SPR! Nothing says I love you more than making sure our wedding doesn't conflict with SPR weekend.)
Posted by Kyle at 9:33 PM