Oh no how is it Sept 1 already??? I didn't even get to write some nostalgic "how can it be the last week of August" post.

I actually did not go back to sleep this morning and we were out of the condo before 11am! Woo!

Lunch was at Five Guys Burgers and Fries. Burgers were pretty good. Apparently it's some new chain.

We then drove to Brookgreen Gardens, a place neither of us had been to before. It's a big sculpture garden, but I was more interested in seeing their zoo of animals raised in captivity or that were damaged in the wild, mended but can not return to the wild. I have been to a lot of zoos and usually feel depressed for the animals after leaving, but to know that some of these animals actually have a second chance for life that they normally would not have had, if it were not for human intervention, gave this zoo a whole different spin.

We went on a tour. I was in awe of one guy who was on crutches and crutched his whole way through the entire hour long tour. Kudos to you!

This HUGE spider was not a featured tour participant but was photographed by many. Too bad this photo doesn't really give a sense of scale of just how big it is (here Mr. Spider is hanging out on his web): 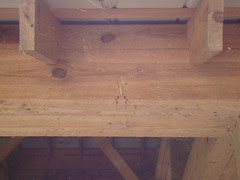 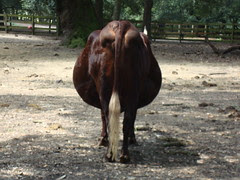 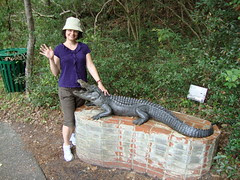 No photos, but Pete and I also went to this "learn about the animals" session where we got to touch snakes (they are a lot softer and not very scaly as I thought) and even an opossum which is very soft.

Dinner was K&W fried spaghetti, mixed veg and soft roll, with chocolate cake to boot! When we visited in 2007 they didn't have chocolate cake at all...and here it was!!! When I was little, my parents took me to Myrtle Beach a lot and we always ate at K&W. I definitely remember the chocolate cake and was sad not to see it in 2007. There it was tonight. Whee! This was also a new location that we had never been to before, in Murrells Inlet. 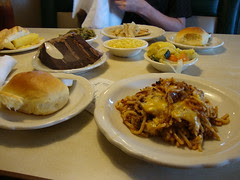 We went to Gilligand's Island golf, which had two courses in one. The holes were really challenging and somehow I wound up at par on the second course (Pete won the first course). 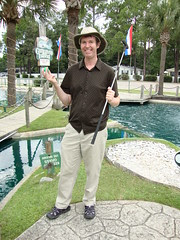 Then it was off to Dairy Queen for ice cream (yes, cake *and* ice cream in one day, it must be vacation) and then a big walk on the shoreline of the beach! Just google mapped it--2.4 miles total.