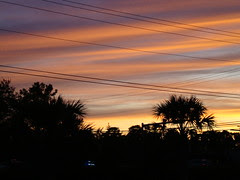 It's Labor Day weekend!!
and today is our bonus day of Myrtle Beachness. We usually fly home on Saturday but because of the long holiday weekend, we're flying home tmw. Thus, we have an extra day of fun! 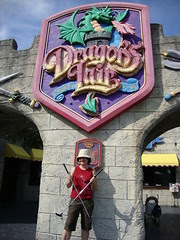 Yesterday we went to two different mini-golf courses: Dragon's Lair (which we last played on my birthday in 2007) and "Hawaiian Village Golf" which is the sister course to "Hawaiian Rumble". We played Hawaiian Rumble in 2007 and I played it with my dad in the early 90's. Hawaiian Village was new to us. It used to be "Sutter's Mill" mini-golf, which is evident in the props for the course (such as the steam locomotive engine and railroad ties) and occasional signs that still refer to Sutter's Mill. We enjoyed the courses until the second half of the second round where we were stuck behind 3 parties of 3, a party of 9, and 2 parties of 2. Time slowed waaay down. We would have enjoyed it more if we could have played all the way through. So in total we played 4 rounds of golf yesterday, 2 at each course (each course had two distinct courses). I think I played my personal best on the Pineapple course at 2 under par.

Oh, and what's up with courses having music? Dragon's Lair played the same 3 songs over and over, while Hawaiian Village started off ok with Elvis and Don Ho, but ended up with Jimmy Buffet. It reconfirmed how much I dislike Jimmy Buffet music. 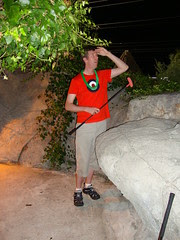 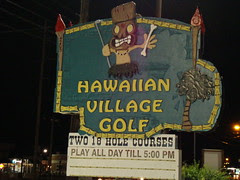 We went swimming yesterday morning. The ocean is pretty tough on my knees, so we didn't stay in there for very long. We went swimming in the outdoor pool because the indoor one had loads of kids led by an army sargent telling them what to do and it was too loud. 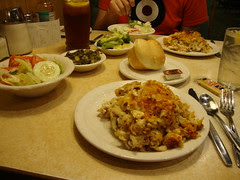