Ha ha, we're trying to do laundry and the mini-washer is having a fit. Now, I lived in an apt for 4.5 years and I know a thing or two about unbalanced washing machines, and namely, how to fix it (redistribute all the stuff inside so it's balanced). But this one--the entire inside of the washer is like, uncentered, unhinged, so for the spin cycle it is having fits. I have never seen a center drum of a washing machine NOT be centered in the machine itself. Oh, the poor people in the condo underneath ours. Also, the toilet in Pete's bathroom runs periodically (I know, a new flap is in order for that) and the stainless steel fridge makes loud grumbly noises (to be fair, the fridge made that noise in 2007 also).

Woo, ok, today the sun started to peak out--then it went back in. I was undeterred in having a day at the beach, so after lunch we headed down there. It was gray, it was windy, sometimes we were battered by sand, it was slightly too cold to be sitting down there. See, Saturday and Sunday was really really warm and hot, and then after Monday's rain storm, things cooled off quite a bit. Wow. But the water was warm, actually felt warmer than the air. And I wrote all my postcards while on the beach. And we wrote out our list of pix that we want our photographer friends to take during our wedding. We even wrote a mission statement for their work for our wedding: To capture the spirit of the day in a photojournalistic style. Be inconspicuous during work. Have fun personally. Don’t work the entire time.

Also, my parents stopped by my house to pick up the mail and have confirmed that cardboard Elvis has arrived and is now in the building.

After dinner we went to play two rounds of mini-golf at Pirates Watch. The owner was super nice and the courses were good ones to play. There was a lot of climbing but my knees didn't hurt at all the whole time. I wonder what I can attribute that to--actually doing all the exercises and the massage techniques in the book titled "Treat Your Own Knees"??

I thought that maybe we could do a day in Charleston because I've never been there before. It looks like it's a bit of a drive away, though. I can't believe that we've already had 4 whole days here and we only have 3 more whole days left. Vacation always goes by way too fast. SIGH! 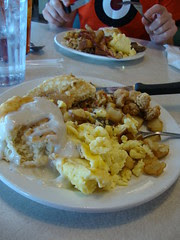 It was K&W for dinner: 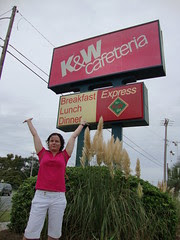 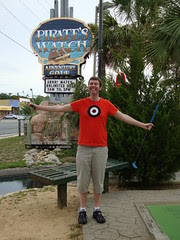